I have always been "bitching, complaining, repeating, talking, etc, etc" of the sudden increase in temperatures in Luzon, Philippines from the middle of February this year! Imagine, in early February we were still at the most comfortable temperatures yet of at least 27°C, courtesy of the Easterlies from cold countries. Then suddenly we experienced the temperatures rising to 33-38°C in a few days, not even a week! It was too drastic that i still haven't called for the airconditioning repairman. My unit has to be pulled-out for repair, but i haven't prepared because i thought the hot season will still be in March. That is totally underestimating the effects of climate change!

This morning it says the Heat Index is 39°C, can you feel that! Those used to winter climates will die in hearing they will be put in that temperature.  The funny part is that our Weather Bureau is not officially announcing that we are already in our Dry Season, because some easterlies are still at the northernmost-eastern part of the country. HI of 39C was experienced last year in April, when we are already tense waiting for the first rains, that might alleviate the heat. So it was advanced by 2 months. I can't imagine what it would be like next year and the succeeding years. Please help us God!

Anyway, back to business. The good thing is that our vegetation continues to be green and flowering, except for the annuals of course. They are now dried or wilted because some clayey soils are already cracking from dehydration. 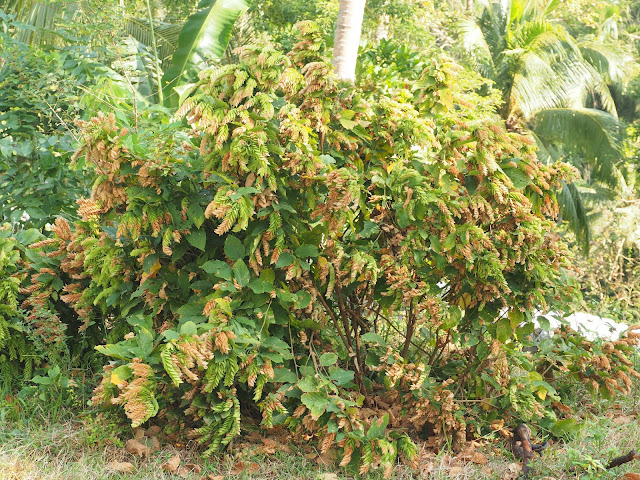 Flemingia strobilifera was posted still purely green last month, now it is already maturing and dry. Those shrimp-like structures already have mature seeds ready again for the coming rainy season. This is not in the garden but in the adjacent property. 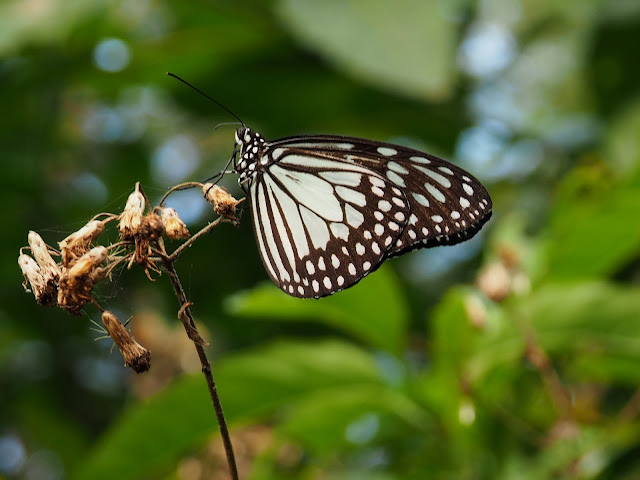 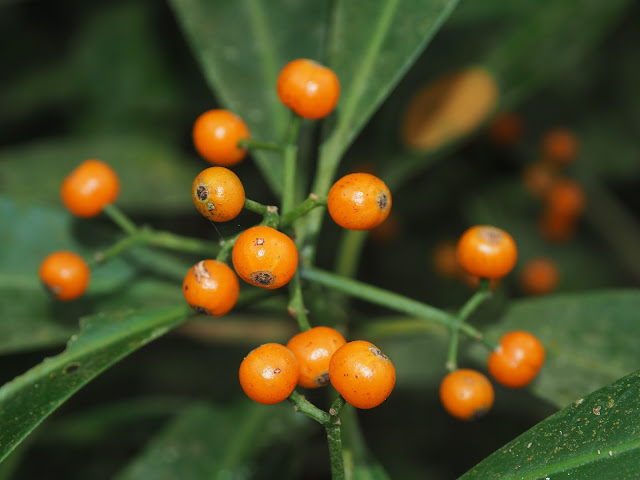 Locally called Tagpo, Psychotria luzoniensis (not sure ID), is a medium sized bush that is growing under the trees.  It offers flowers for butterflies during the wet season and now the fruits mature into golden berries eaten by birds. 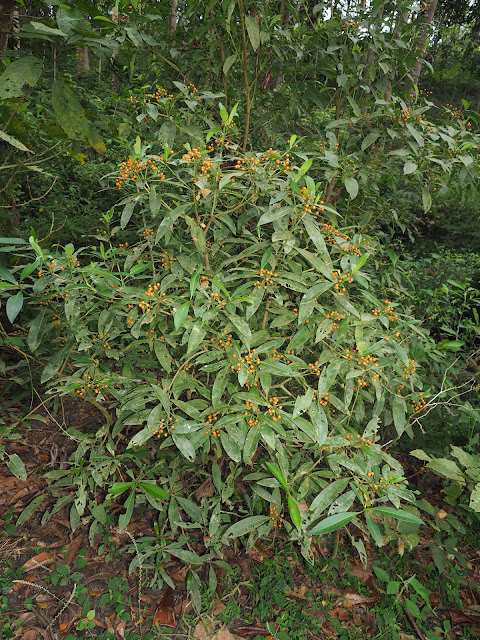 the tagpo plant with ripe fruits 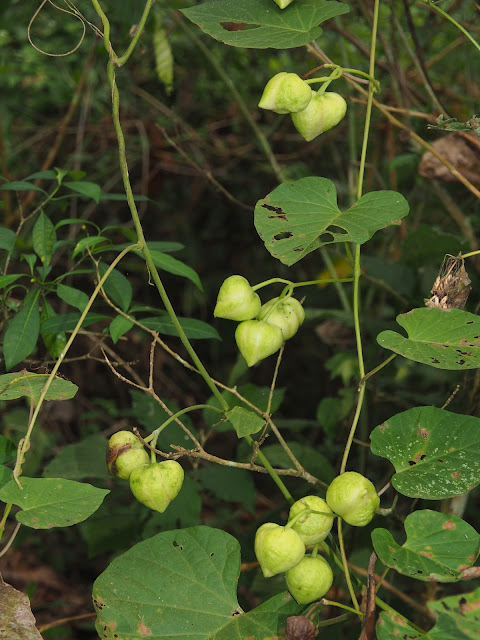 This Ipomoea sp. vine with lavender flowers now have plenty of maturing fruits,
again trying to be ready for the rainy season in May-June. 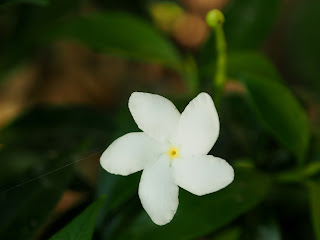 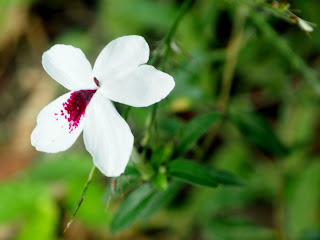 These are also flowers under the bushes, also visited by butterflies.
The first is pandakaki and the 2nd i still don't know. 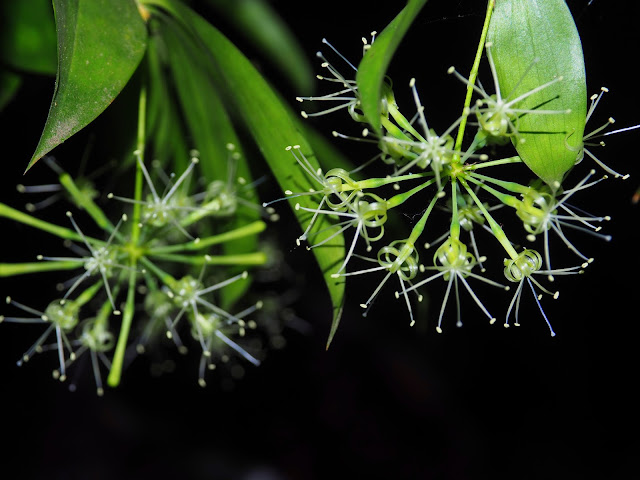 This is now in our garden, Dracaena surculosa, with very sweet fragrant blooms
that open early in the evening. The scent resembles some sweet hoya. 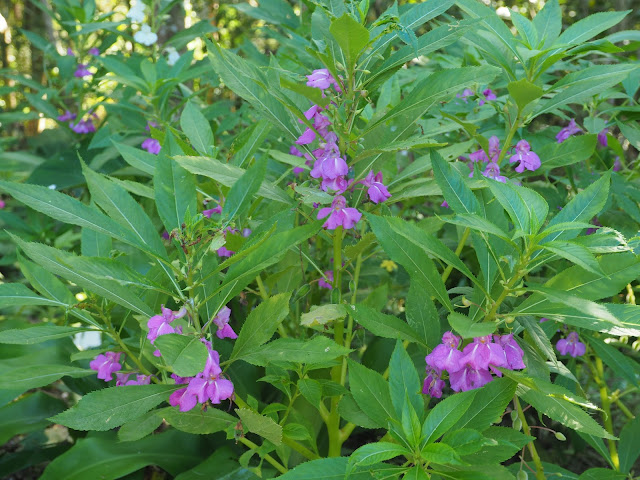 Impatiens balsamina at the last vestiges of reproduction 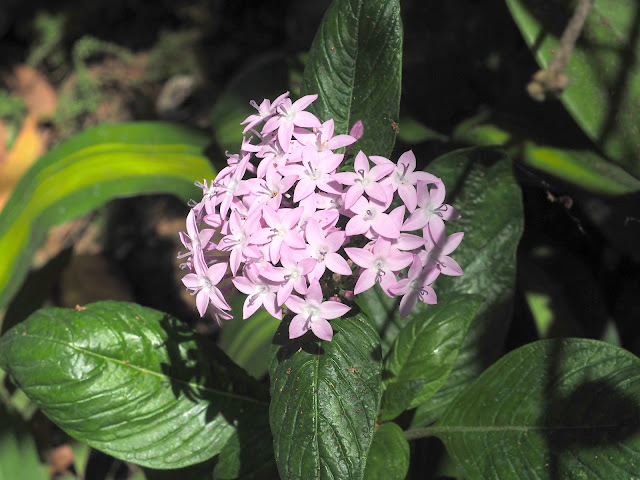 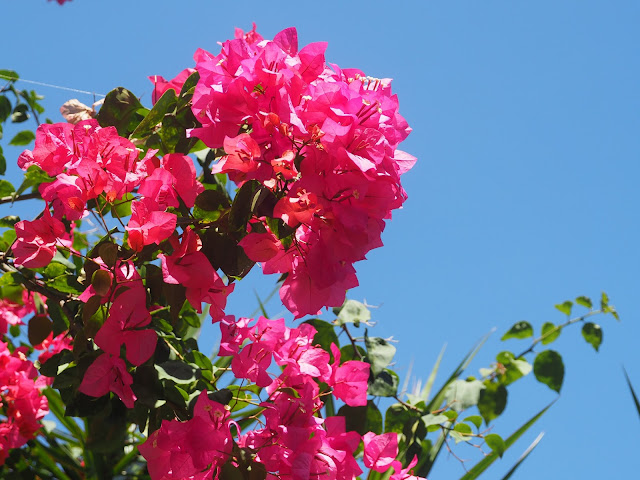 the ever heat happy bougainvillea, when others dry they still bloom 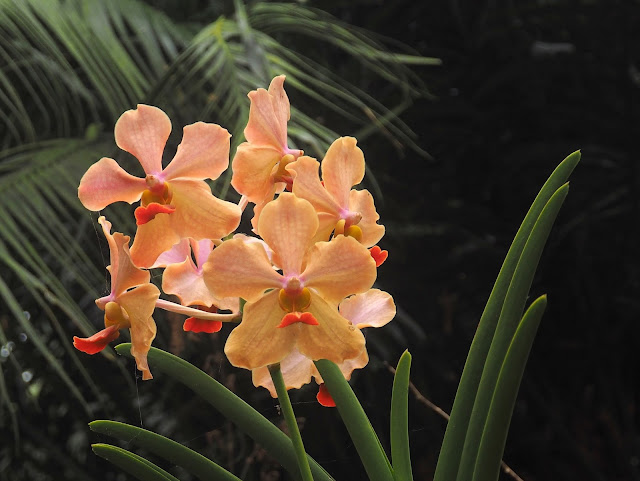 my self supporting Vanda sp. trying to catch attention 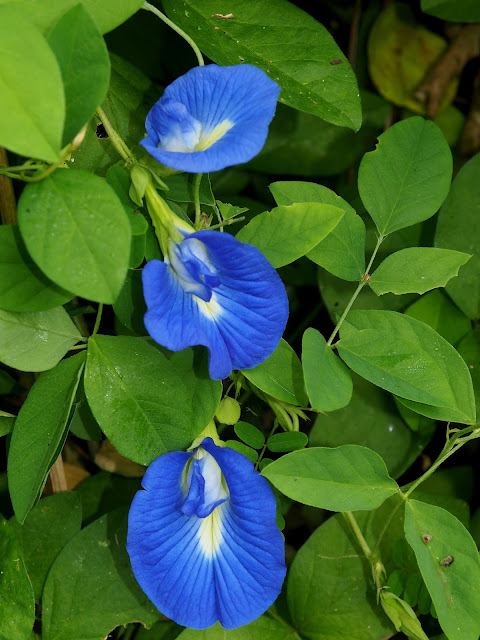 a vine from the wild but domesticated in my garden, butterfly pea or Clitoria ternatea 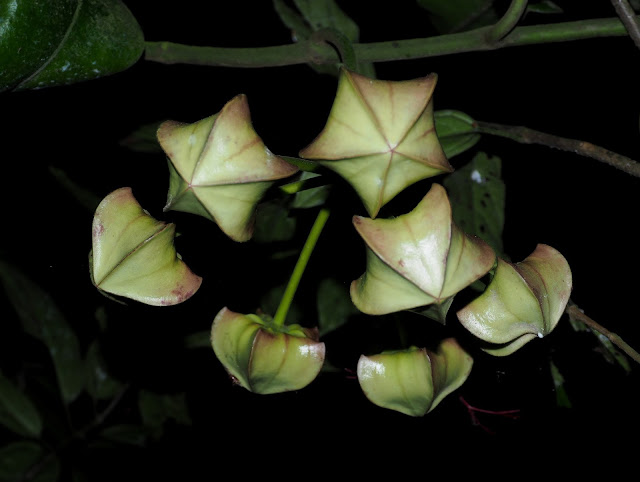 The biggest hoya bloom found in my garden, Hoya imperialis,
which i haven't seen when it opened 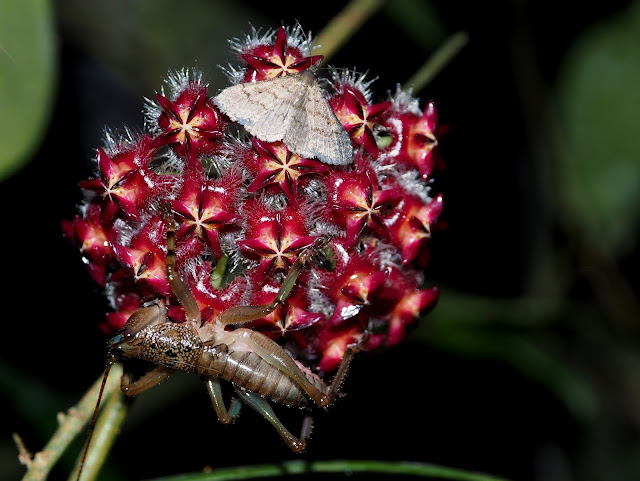 Hoya mindorensis being visited by a moth and a cricket at night.

Life Transformations unlike ours!

It is already very hot at the start of February, the temperatures resemble that of what were in April to May of the past years. Can you imagine 38°C immediately following the colder temps of 27C? The Easterlies Winds suddenly stopped, so our temperatures immediately sour to heights. Respiratory sickness is also on the rise, and that includes me. Last weekend colds and cough set in on Friday and the weekend was really bad. I know i need to rest, but because i am not used to sleeping during the day, i cannot sleep, and i cannot help not touching anything in my condo unit. So i clean the house a little, wash some clothes and cook. I guess that is not much to be stressful and weaken my situation. I also did some carrots and cucumber juicing which i still lugged to the office. I am still not well, but have to go to work.

My situation got worst because my airconditioning unit has to be pulled-out by the technician to be repaired. And i need to wait for maybe one week to have my room temperature be colder again. Oh life, how sad! But i will post my photos taken the other week when i was at home in the province. 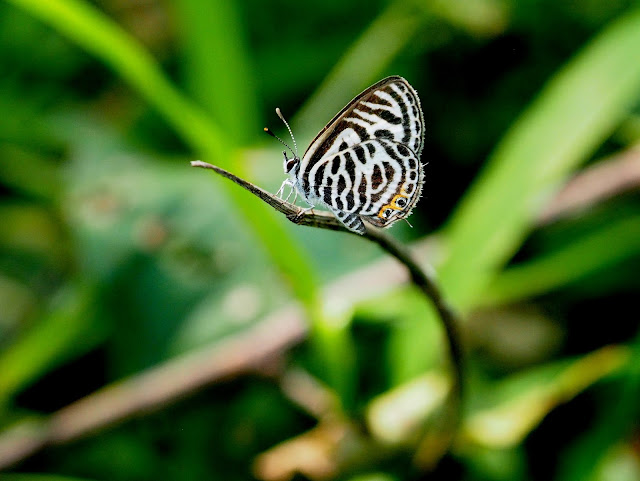 I always leave house in the province at 6:30 in the morning to search for butterflies. I already have one area under some tall trees that i consider to be a "butterfly sanctuary", as there are always a few butterflies there, plus some bigger moths. Sometimes i go there after going to some areas, but this time i went there first. 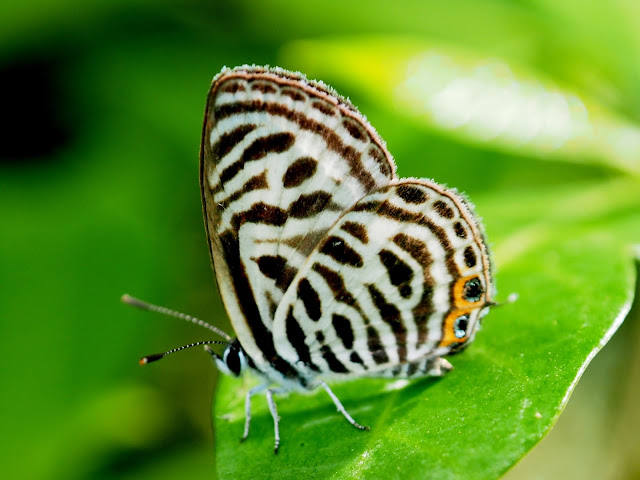 I have spotted this butterfly only a few months ago in another site, this time it was in the "sanctuary". I enclosed it in quotation marks because i just coined that word for this place. There were a few of them there, transferring from this broad-leaf weed to another clump of a white flowered weed. I never knew then what the weed's ID is. 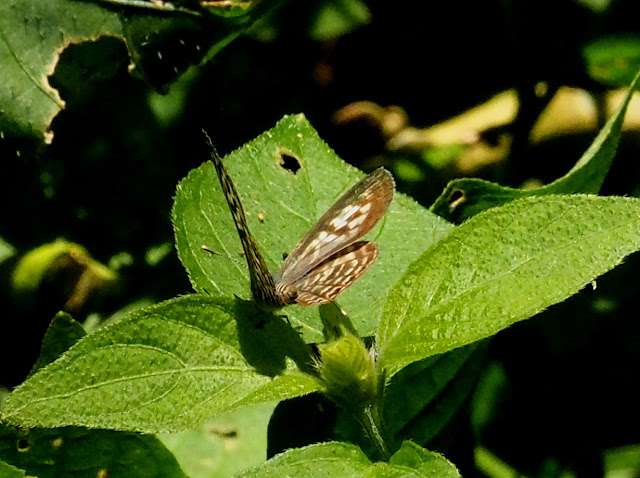 upper side of the female 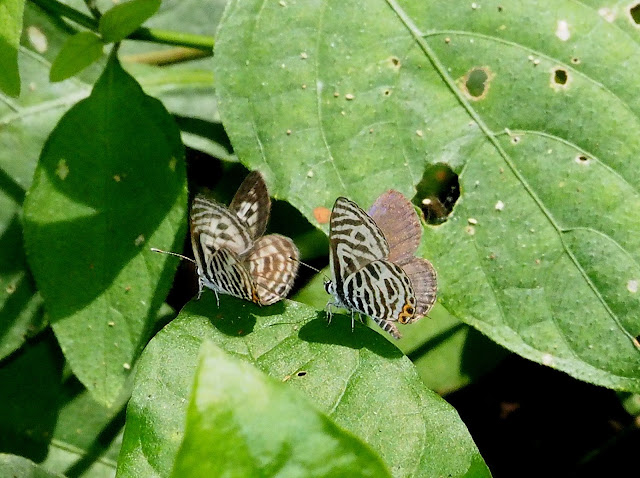 Seeing a few of them there early in the morning gave me an idea that a host plant maybe nearby. They did not fly far from the area, only going back and forth to two group of plants. I suspected that they are the host plants, until i see one in action. One below is actually ovipositing on the cluster of flower buds. 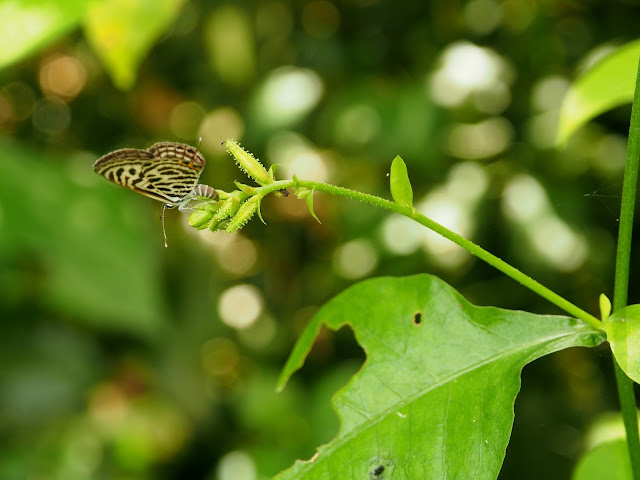 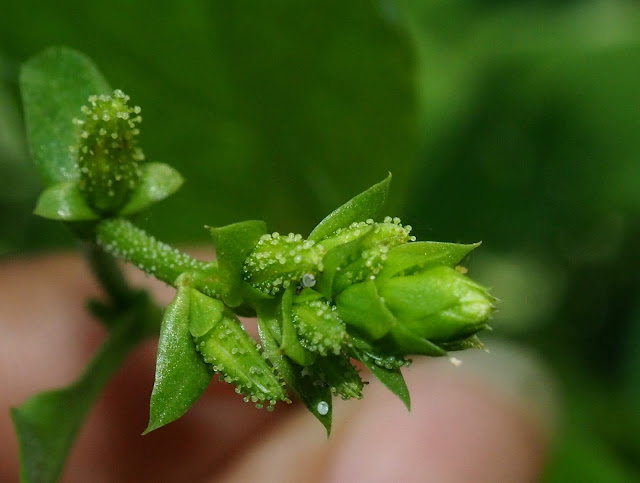 can you see 2 spherical eggs, one on top more mature

I searched among the buds, in between them and in everything there. I was not able to see any larvae but a few tiny eggs, which my lens cannot capture well. Those protrusions on the buds are sticky and maybe they camouflage there perfectly, as the protrusions look like small eggs. 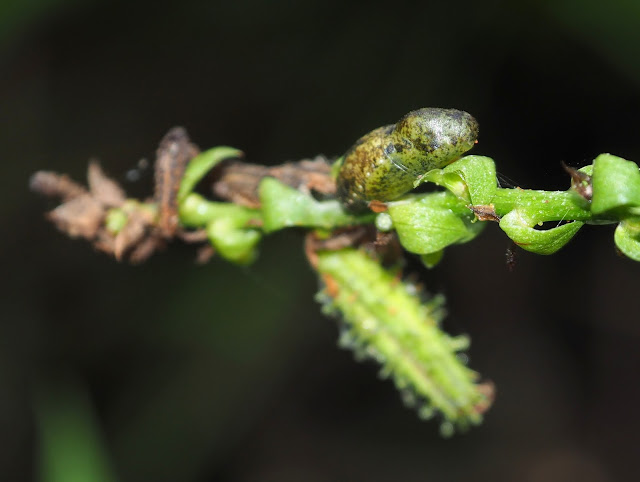 more scrutinizing gave me a pupa, side view, it looks like one of the protruding fruit of the plant 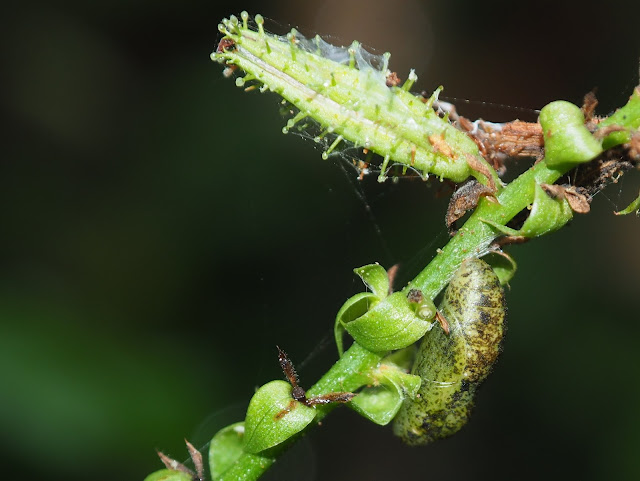 clearer view of the pupa side view, showing design of the wing, it hangs downwards 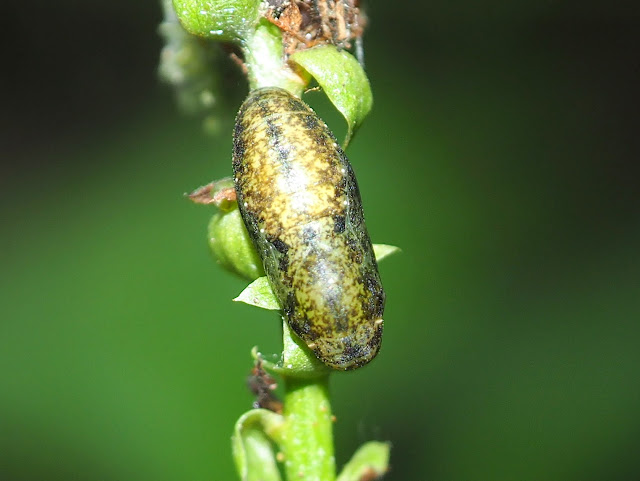 top view of the pupa, tail on top 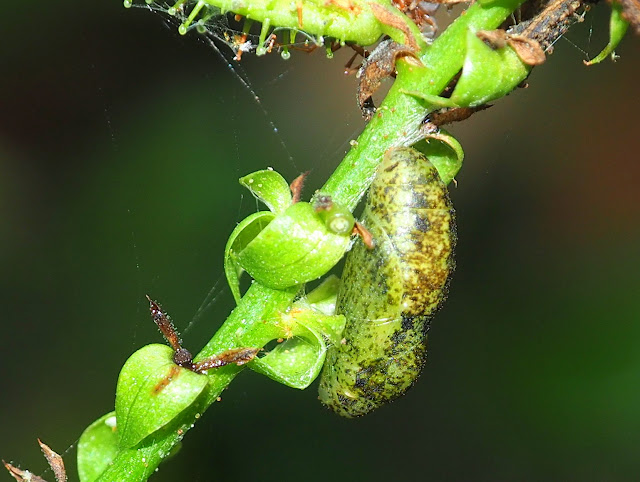 a better view of the pupa 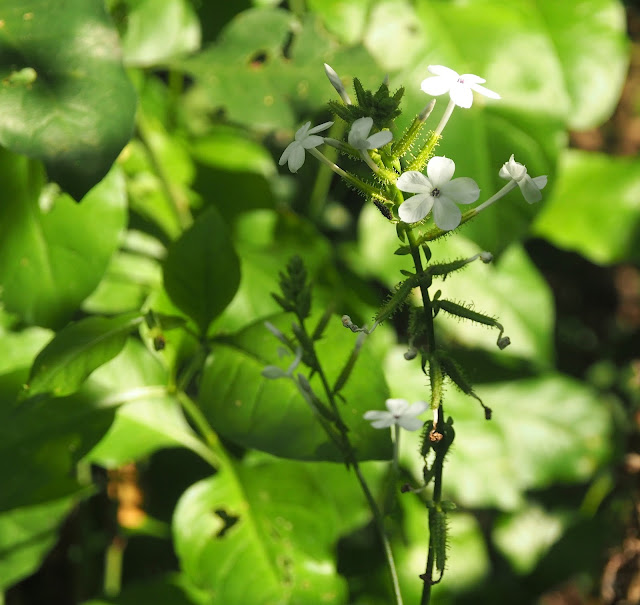 the blooming inflorescence of Plumbago zeylanica

It is difficult to see any pupa there without really looking intently. Maybe a magnifying glass will help, but i do not have it yet. I actually look at the picture in my camera to see whether i already got it right, then take lots of photos to choose better angles. My naked eyes, not so 20:20 vision, is not good anymore for their size. 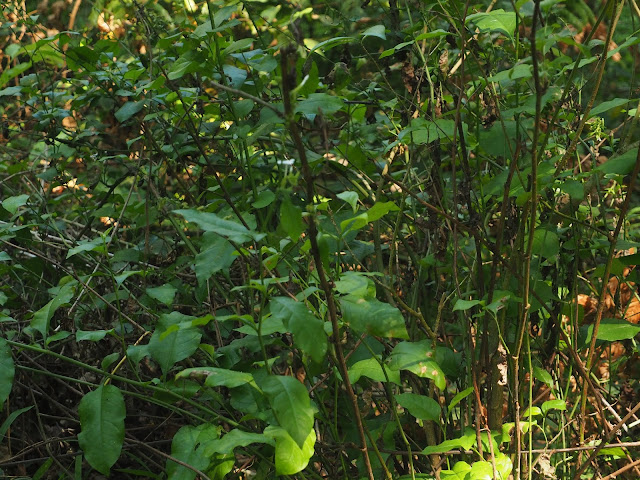 Above is the thicket of the Plumbago zeylanica. Actually, i only realized the connection after identifying the plant, which came in a few days after. How clever, the butterfly is named Plumbago Blue. It is one of the blues and hosted by Plumbago zeylanica.

Lastly, i took the pupa home to be sure if it is really a Plumbago Blue. Unfortunately, i forgot to take it with me when i left for the city where i work. Ialways texted my sister at home for the progress of the pupa. She just observed it got darker in color. Lo and behold, after a week of observation it eclosed, but when she was about to photograph it, it just duddenly flew away! She was disappointed too, but confirmed that what she observed is the same as my photos.