Moths are assumed to be the pollinators of hoyas. There are still no concrete evidence to this assumption, but arises due to the fact that most hoyas open before dusk concomittant with the scent and nectar production. They remain so during the night. Some hoyas diminish the scent the following day and resume the strong aroma the following evening. It is not known if the receptivity of the stigma is continuous during the life of the flower.

Most moths are nocturnal or active at night. What else will the hoya flowers lure with their sweet scents if not for the nocturnal insects! This led to the assumption that they are hoya pollinators. However, concrete data or evidences to this assumptions are not yet published, so they still remain assumptions. I tried observing the insects that visit the hoyas, day and night whenever i have the time. But of course, night observations are very limited when i purposely go there with a flashlight and camera, a bit cumbersome task. Sighting moths are by chances only, purposeful observation needs some light source which disturbs them or chase them away. Sometimes the moths fly away before i can focus my lens. I was just lucky in documenting a few species because my garden is just a few meters from the terrace. 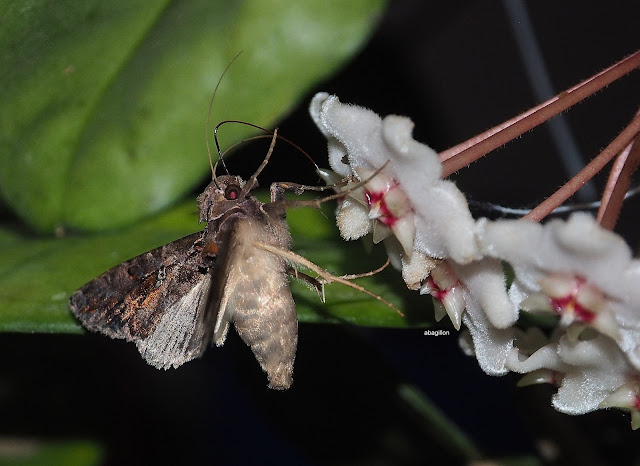 A moderately sized moth which allowed me to photograph it sideways and on top is not identified yet. The Philippine Lepidoptera group on Facebook are still trying to identify it. 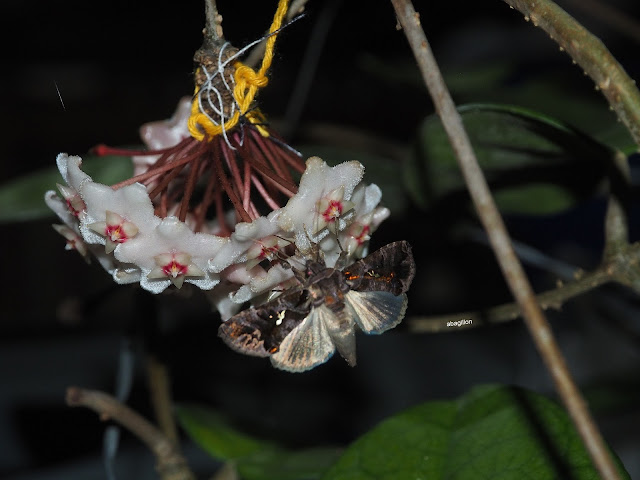 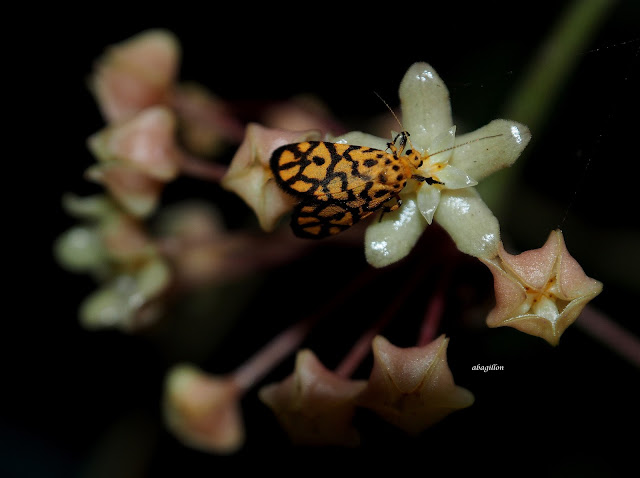 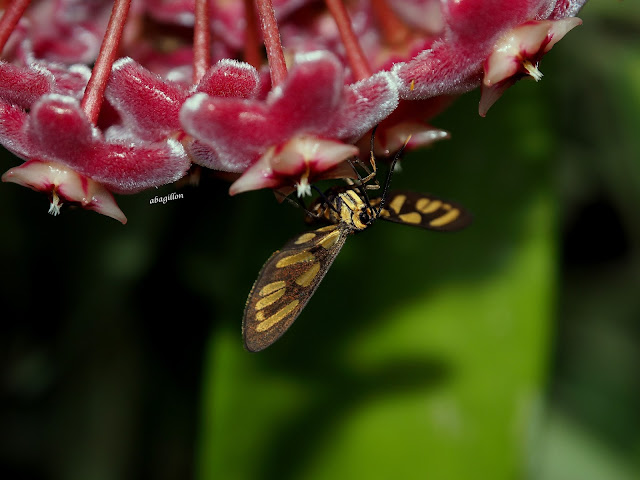 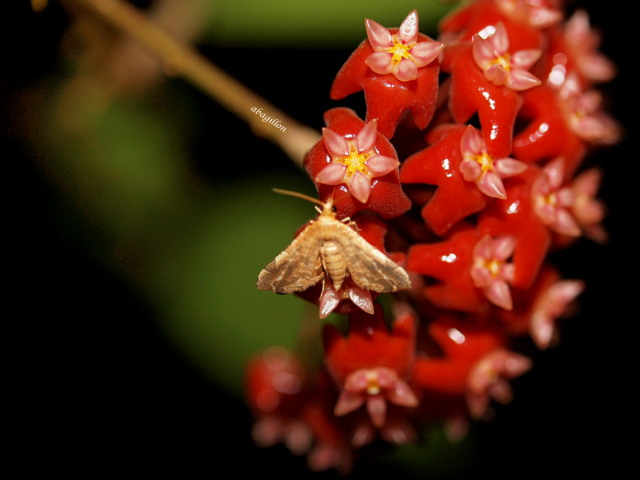 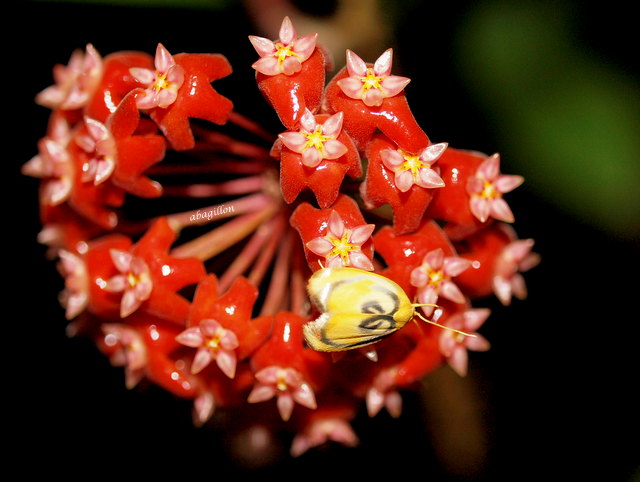 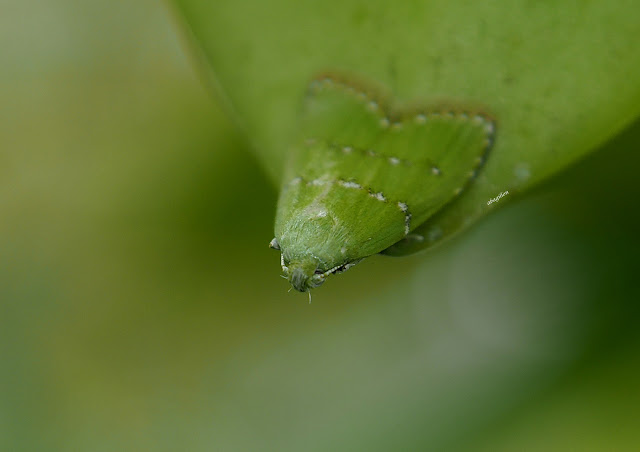 Above and Below are the same green moth. It is amusing and interesting as it always assume camouflage at the tips of hoya leaves. I tried driving it to move elsewhere, but it just landed on another hoya leaf and purposely sought the tip before it stopped moving. A perfect camouflage! 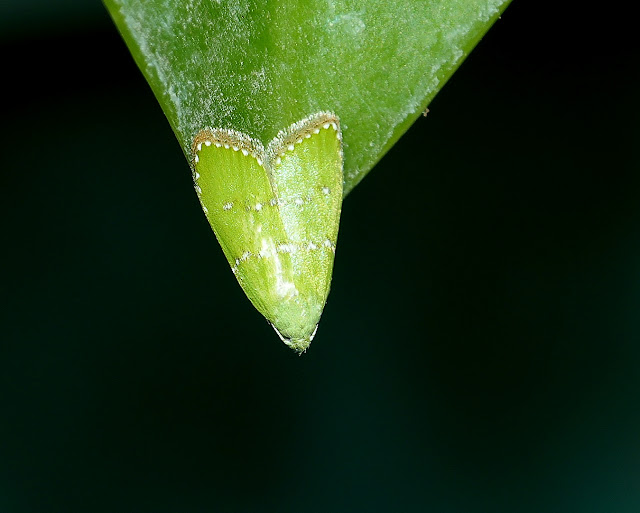 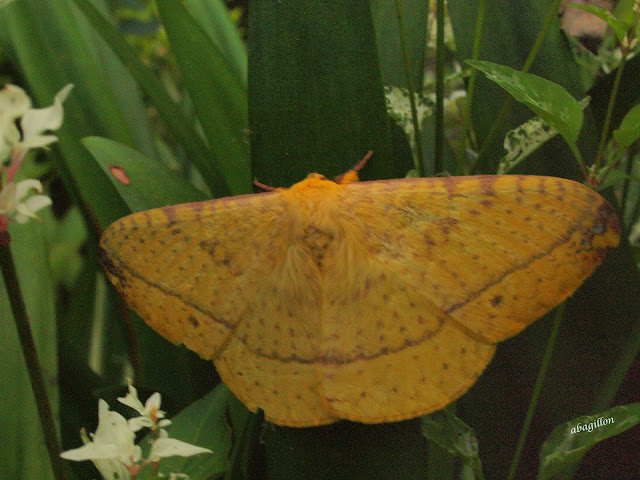 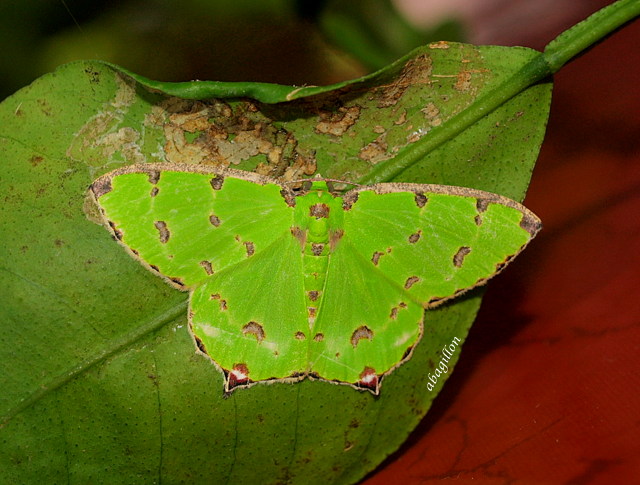 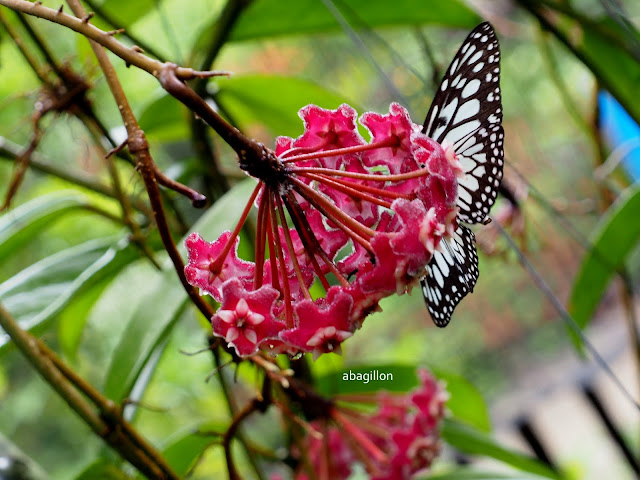 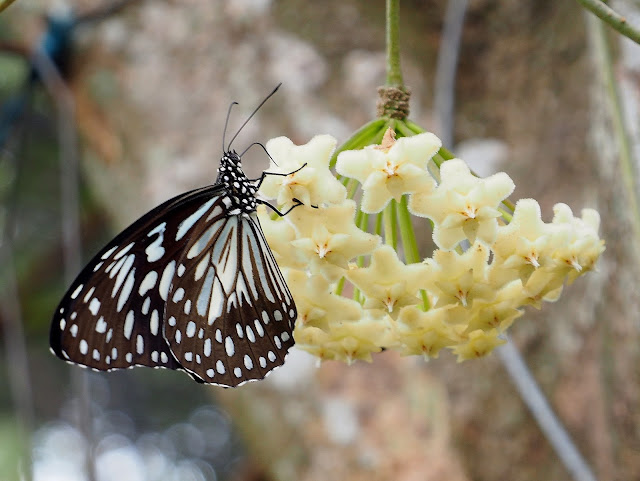 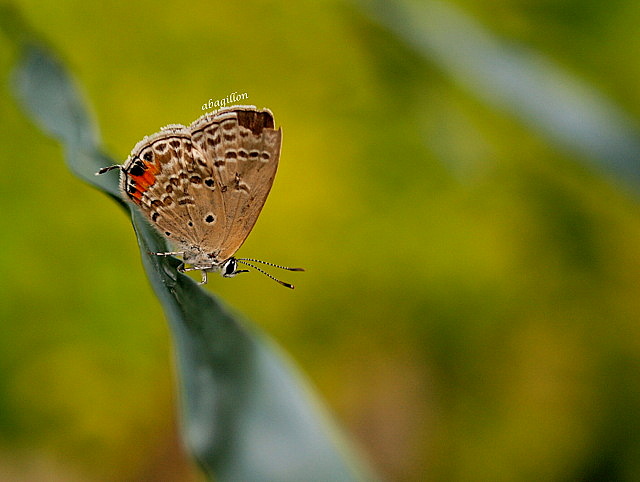 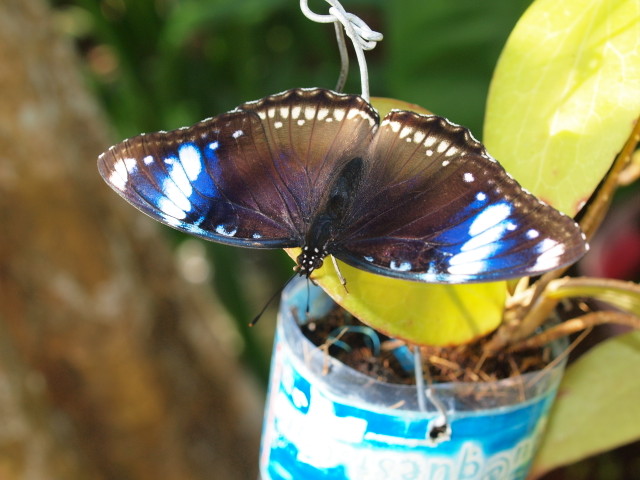 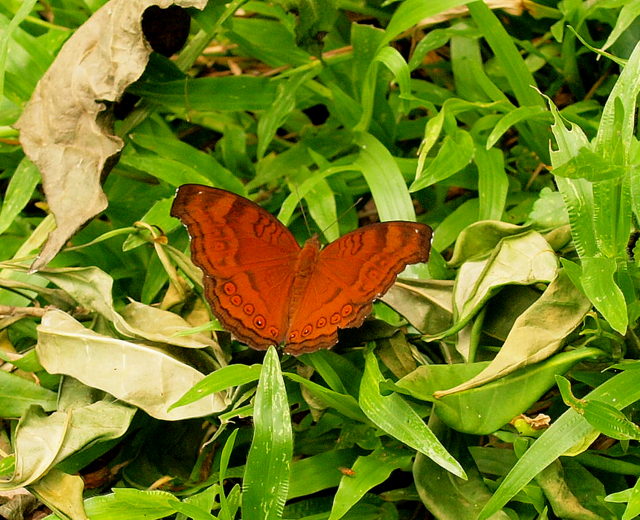 BROWN PANSY, Junonia hedonia ida
This is seen on the grasses at the ground under the hoyas. 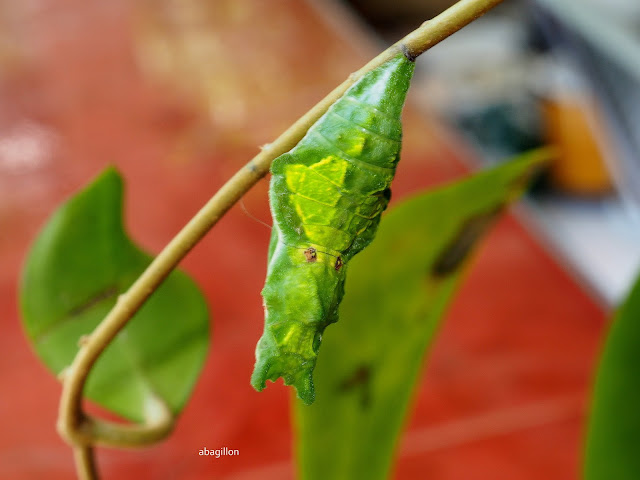 A common mormon pupa on a Hoya mindorensis, isn't it great. But this was only possible because a young hoya plant was near the base of the citrus plant, the host for this butterfly larvae. The other week i just saw the caterpillar munching on the citrus leaves, now it has pupated. I wish it will eclose next weekend when i am home again.

Since i started tending hoyas in 2011 i left the habit of chasing butterflies and moths. I only have the afternoon of Saturday and the morning of Sunday for the hoya activities, before i leave again for the big city. I cannot say that it is a stress-relief because the very limited time to finish the work make it stressfull too! I just don't know, but i like what i am doing. A hoya-enthusiast friend very aptly said that the other half of hoya addiction is hoya photography. And in my case, not only the flowers catch my attention, but the leaves, the peduncles, the stages of blooms, the roots, and the insects that visit and reside within the hoya community.

I thought only moths and butterflies visit hoyas. Hoyas start blooming in the afternoon before dusk, concomittant with the sweet fragrance that most hoyas emit. This connotes that moths pollinate them because moths are mostly nocturnal. However, a lot of life go there at daytime, and a lot of them make the plants their home. My hoya area is a biodiversity in itself, with preys and predators living within it. And i am the onlooker, observer, photographer, gardener, rolled in one! 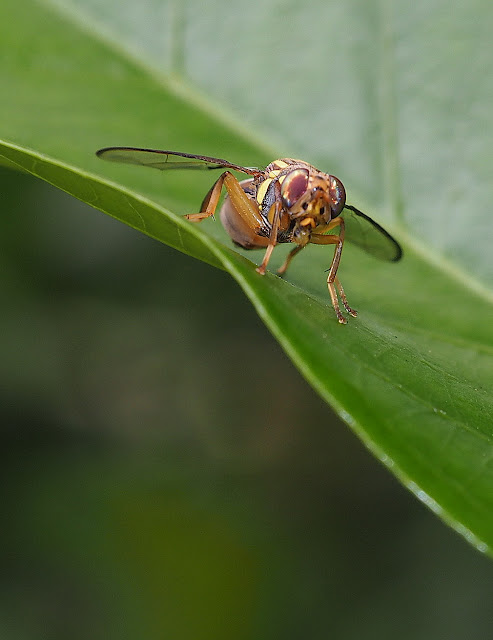 This is a fruit fly, often associated with ripening fruits, but i see them often on hoya leaves. They just stay there for long hours unless they are disturbed. 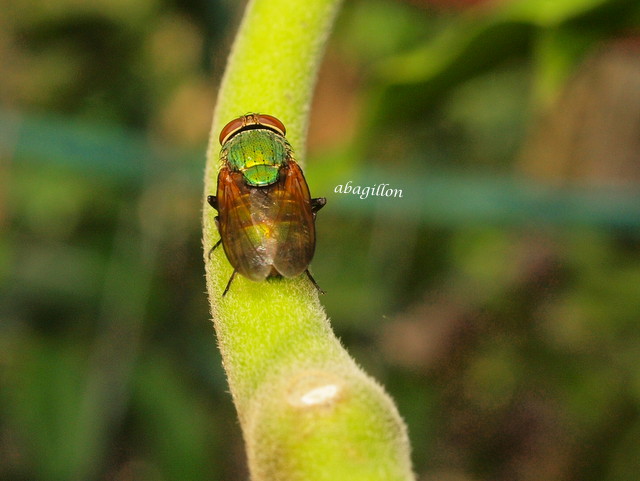 This fly, no identity yet  but maybe also a blowfly, is often seen on hoya leaves and stems too.  I just don't know yet if they are friend or foe. Like the fruit fly, they just leave when disturbed. 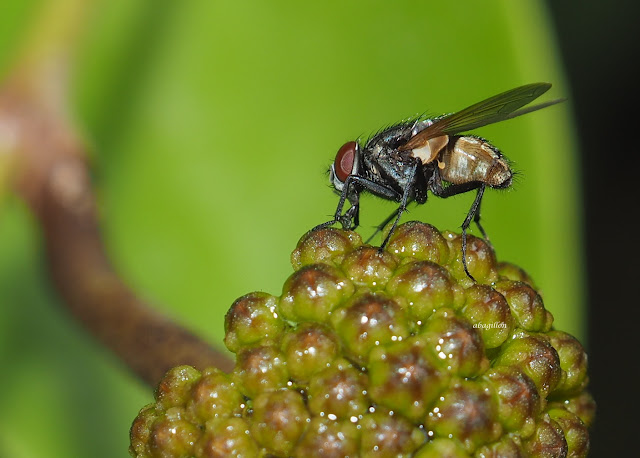 Another species of fly with the same behavior has more hairy body and legs. Maybe this is one of the Blowflies because of the hairs on its body. A report says it voraciously consumes larvae of other species, and primarily they are necrophagous, eating decaying organic matter. 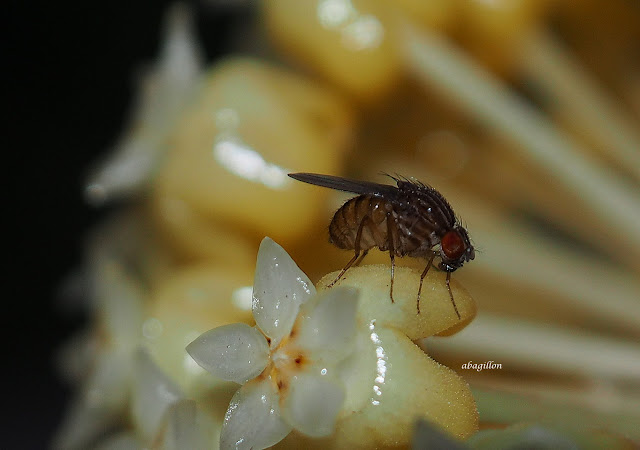 Being necrophagous, i just don't know what they are doing on hoya leaves and flowers. I still haven't observed them sucking nectars as other insects do. However, i have seen a post by a hoya enthusiast of the hairy flies with hoya pollinaria on its legs. Those feet probably can pollinate hoyas. 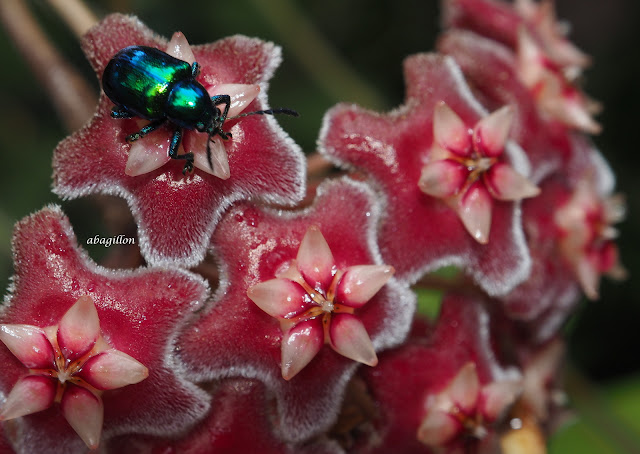 This metallic green beetle is often seen in hoyas too. I am now sure the reason it is there, sucking nectar. It was caught in action, as the nectar are produced in between the two corona lobes. However, reports say it is sucking plant sap also, so it can also be a hoya foe. 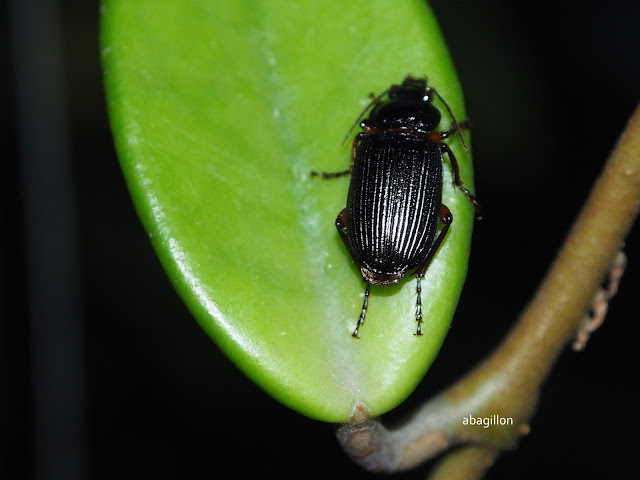 This black beetle might just be lost, or it might also be looking for nectar as the top and bottom beetles do. However, i haven't seen it sucking nectar yet as it is not very commonly seen in hoyas. 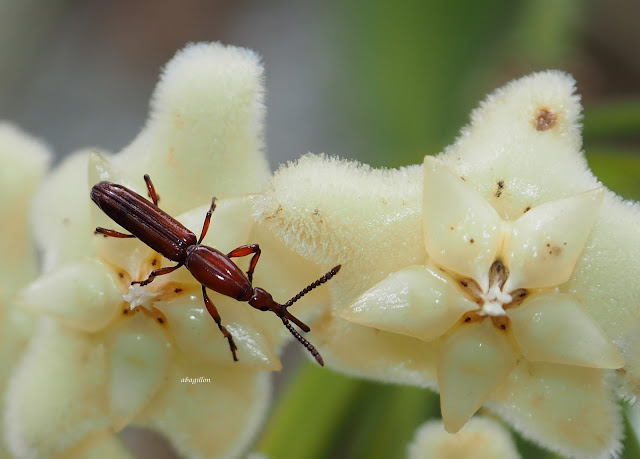 Clinidium calcaratum, are reported to feed on slime molds and decaying fungi. Why it is found here sucking the nectar obviously defies the original normal observation. But who can resist the taste of the hoya nectar, it surely cannot. It kept on sucking even with my prodding presence, seems oblivious of my disturbance. 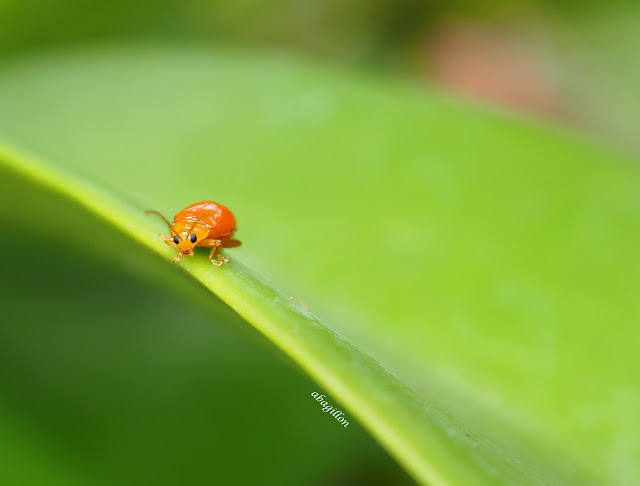 I guess this is a ladybeetle. They eat mealybugs, i hope their population increase. 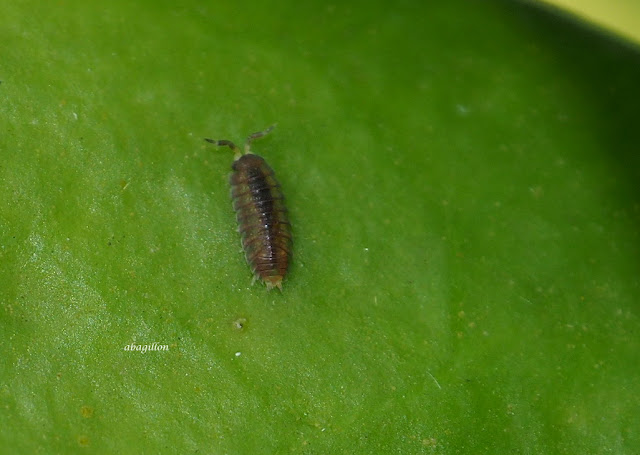 Isopods are terrestrial crustaceans. They are also called pillbugs or sowbugs. They are often found in moist places or under decaying logs and leaf litters and aid decomposition. I often found them in the media when decaying coconut husks are included. However, some of them wander on the hoya leaves, and i wonder why they just stay put there unless disturbed. While exposed they can be prone to other insect predators like spiders and ants. 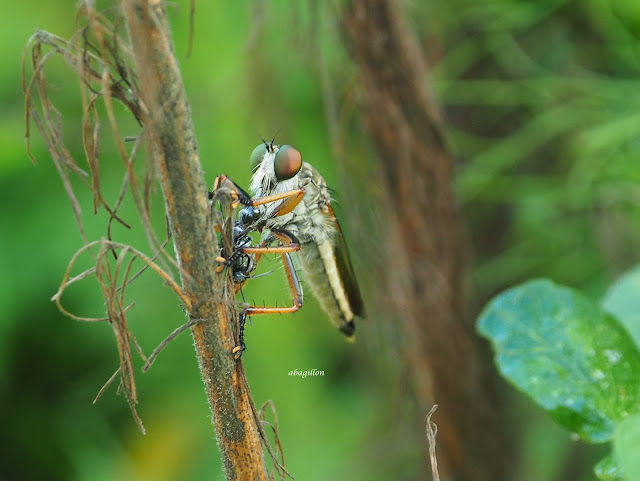 The above also looks like a fly, but i don't know for sure. It is at the active predatory act as shot, having a big ant for its prey. Look at the feet, they have some orange appendages that really look like hoya pollinaria. I wonder if the previous picture i once saw in the hoya group photos, i thought are pollinaria might be this species. This might be a very significant shot, as not many photos have been shot having those pollinaria, and hoya pollination is a very difficult job. It is not conclusive yet what insects do these, i just don't know if flies are one of them. 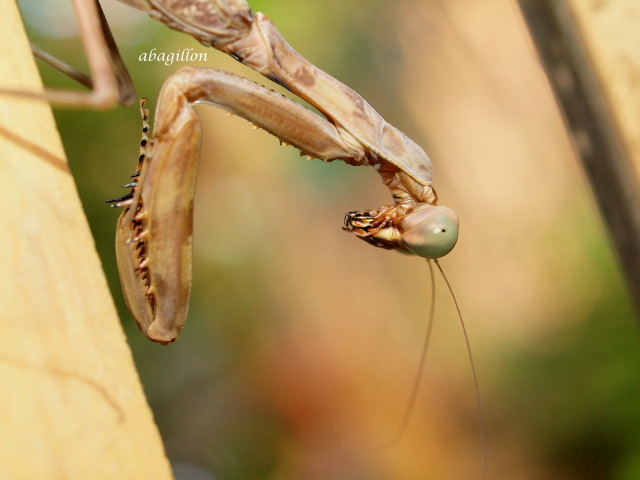 Oh the above insect is very much known as a gardener's friend because it preys on many insects. The sad part is they also prey on beneficial and lovely insects. I saw a green one darting on a butterfly, but failed. Another one was successful in getting a butterfly i am currently shooting, but it is in the duranta flowers. Recently, i just noticed 2 egg masses of praying mantis on the Hoya diversifolia. 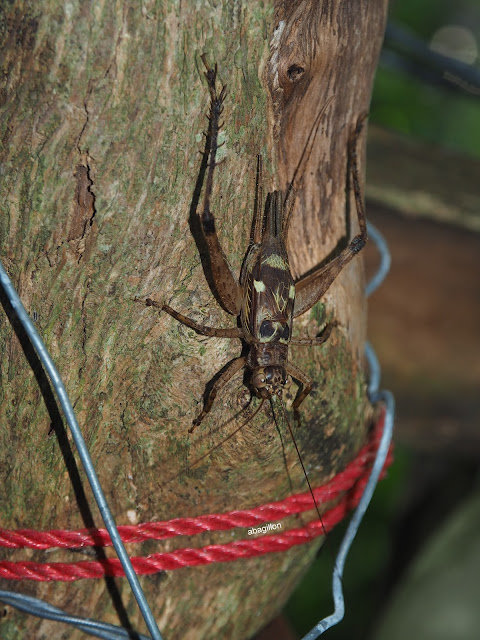 The above looks like a cricket. It is on a trunk which also has climbing hoyas. They are omnivorous, meaning they eat both plants and animals, as we do. They have preference for rotting plant materials, but also like tender growing plant parts. They are not discriminating when it comes to food, so i guess it is preying on many things in my hoya community, be it insect eggs, larvae, or plants. I hope it can be caught by the praying mantis.