Praise the Heavens! The rains have come!

Our normal start of the rainy season is May. There is even an old belief that drinking a little amount of the first rains in May, called Agua de Mayo, will heal common health issues. We just heard this from our old relatives, i am already also old now but i haven't heeded that advice though. Maybe that is only a joke, i don't know. This year our dry season was so long and temperatures so high that Heat Index soared more than 40C, while real temperatures reached 36.6C. That was really hot and disgusting if your relative humidity is very high as ours here in the hot tropics.

So starting last Monday, 22 June, the summer solstice, we are officially in the rainy season. It has been raining some of the afternoons and 2 consecutive mornings. The plants are now very pleasant to look at with their shiny green leaves. The grasses and weeds are already growing at the roadsides and the human species are happier too. Definitely temperatures are now bearable, and we can sleep without the airconditioners.

Our rains in the provinces are a bit delayed than in the city, but the occasional short showers already induced some dormant plants to life. One of the most obvious show of life is with our Hippeastrum puniceum. I have been posting them for a few years now, but this year they are more beautiful. 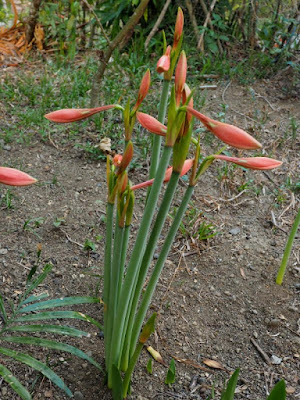 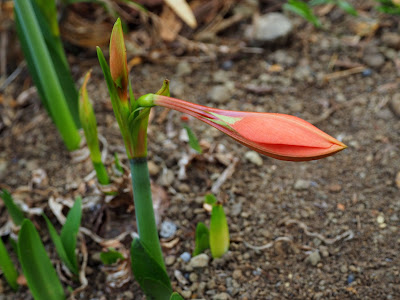 Above left shows the many scapes growing in a mound, blooms not yet opening. Above right shows the differences in height of the scapes, as this one is only 3inches tall, while those on the left are around 2 feet tall. 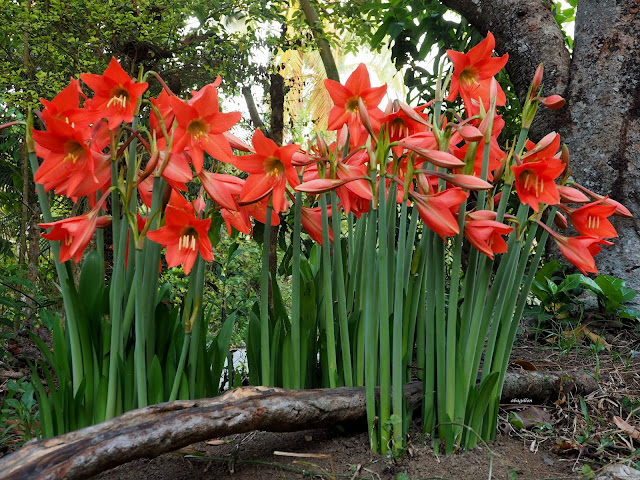 This clump of bulbs were planted at the foot of a golden shower tree, Casia fistula. The soil in this area cracks due to drought, yet after the first short rain 2 weeks ago, the bulbs were brought to life. I took this photo last weekend, when not all the blooms have opened yet. 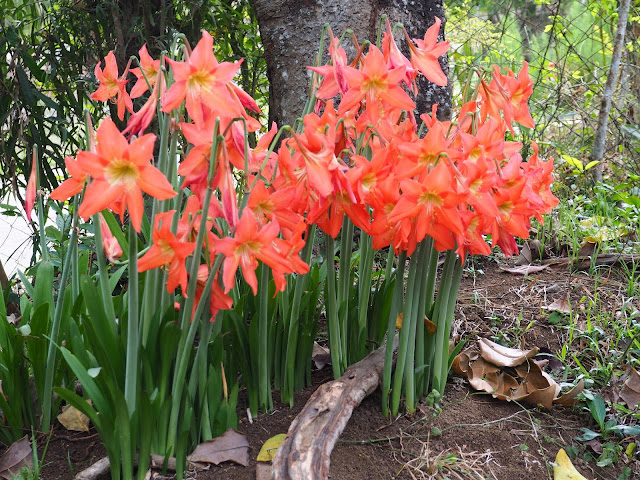 The above and bottom pictures are both of the same mounds, but bottom is taken a week after. You can see that all the flowers have opened, some even are starting to close. 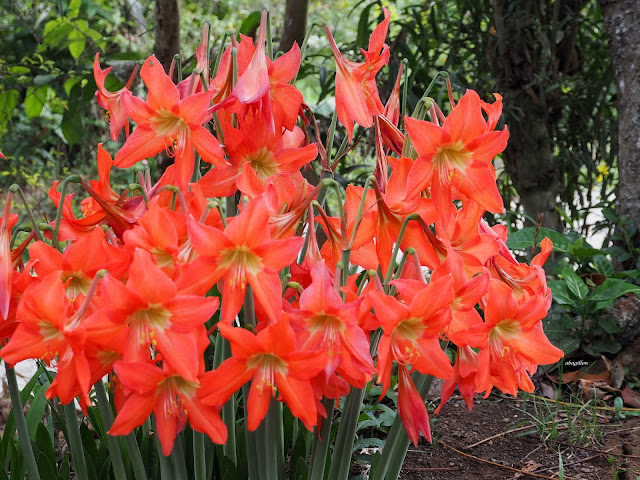 They look so plump and healthy even a week from opening. I am sure the insects are so happy to see them, just like the owner of the garden. 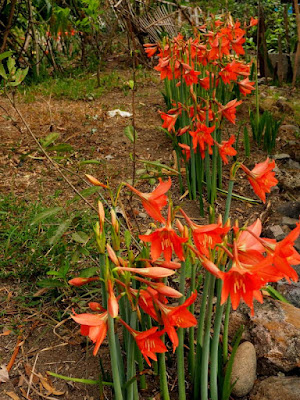 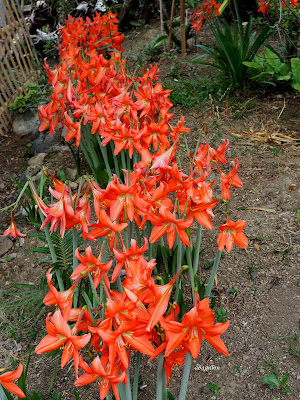 I have planted this hedge many years back, around 10 years. They started with a few scapes and look at them now, so lush and plenty. They were taken with a week apart, the left when only a few scapes are open and the right with most of them already in full bloom. 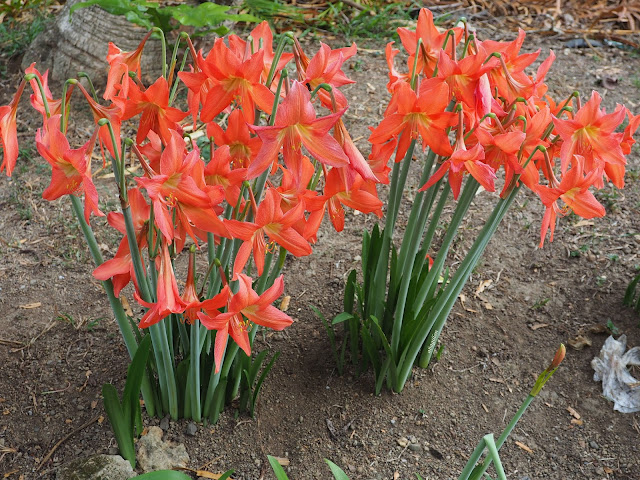 We still have a lot of these mounds scattered around the garden, because some bulbs volunteered to sprout anywhere they want, and multiplied through the years. 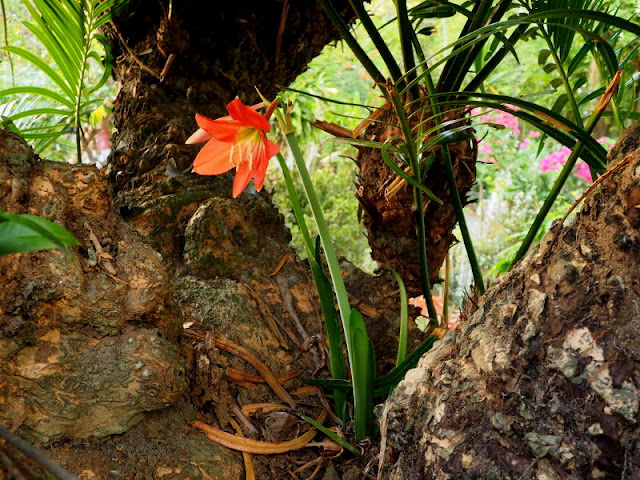 And a most spectacular bulb was growing at the branch junction of this cycas. Last year i saw one flower there, didn't remove the bulb to see if it will survive another year. And look at them now, there are 2 scapes flowering from that single bulb. There are even some bulblets growing. They are really persistent. 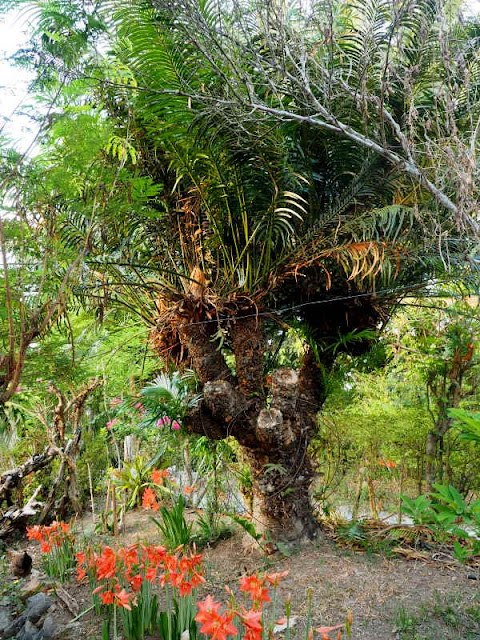 This is the cycas tree harboring the single "lost bulb" in its trunks, the junction of which is 4 ft tall. I will let it remain there still, observe again next year what will happen. I bet 2 bulbs by then will be flowering. I just hope that even with this climate change, the rains will not deprive us of our right to have them in time. By the way, that dried branch blocking the cycas is the dead citrus tree, one of the casualties this long dry season.

Orange You Glad It's Friday
Posted by Andrea at 12:59 PM 8 comments: