I have not been posting hoya lately. There are lots of  reasons i can cite, but actually the foremost of them is the bigger share of the time for butterflies. With only a few hours i can spare for editing the photos, actually it is not really full editing but mainly just cropping and doing the contrast; there is only a very limited time left fot anything. I even cannot make scheduled posts like the monthly Garden Bloggers Bloom Day.

When not going home on weekends, i can edit more and contemplate on what to post next. But still my posting is always spontaneous, whatever comes to mind after looking at the photos. If there is a demand-driven production, i have photo-driven posts! 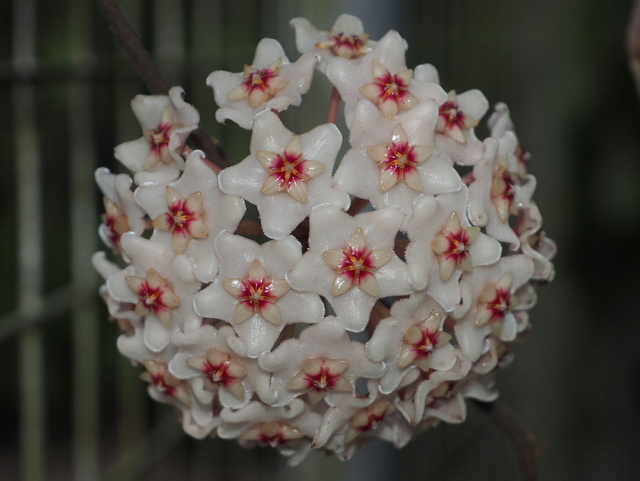 Above and Below: The ever reliable Hoya carnosa is always a sight to behold when in bloom. It always gives a very distinct round umbel that is born on leafless stems. My old plant which has been producing more than 20 umbels at a blooming time almost died 2 years ago. I was able to arrest death, but blooming stopped. I got a severe case of root rotting caused by not so well draining media. It has been out of the ICU, but still recuperating from an extreme case of Near Death Experience! 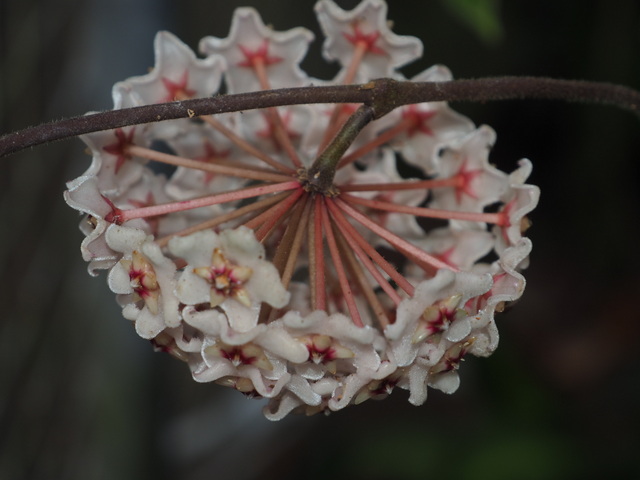 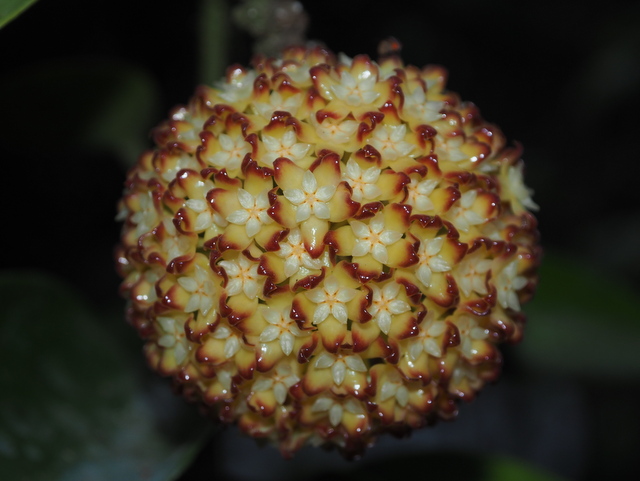 Another species that brings a lot of awe is this Hoya crassicaulis. The normal characteristics is the reflexing corona, so those brown edges are supposed to be bent backwards. However, this particular plant showed this character i supposed to be just because of the plenty of flowers crowding so much in a space-limited umbel, which hindered the corolla from reflexing. This plant also went through a detour and has not been blooming for many months. I already made some cuttings to preempt the unexpected death. To my surprise, the cutting from this plant also produced a true-to-type character of this mother, the inability to reflex. That means the corollas stayed in place like those above, showing exageratedly the bright tip colors. Isn't it incredible? 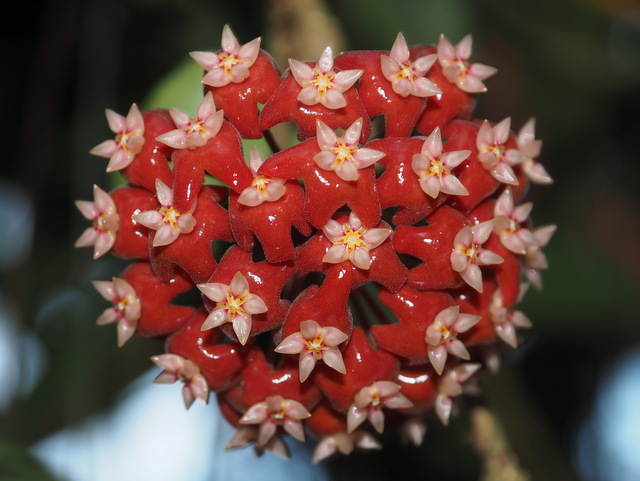 It is not growing profusely like the other species. The plant remains a bit dwindling without more growths, that i cannot even get some peduncle-free stems for cuttings. However, it is so diligent in producing blooms. As soon as they dehisce, the new buds immediately go into development, and you will not wait for long. 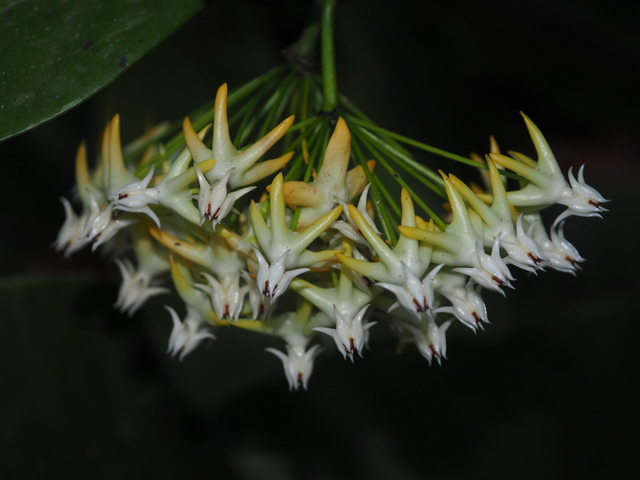 Hoya multiflora is not a vine, but a shrub with erect stems. The unique characteristics of this is its floriferousness. It is not uncommon to see a stem with peduncles blooming in every node. However, mine is not that floriferous because we have just been through a very hot dry season. Very hot air lessens its rate of growth and blooming. 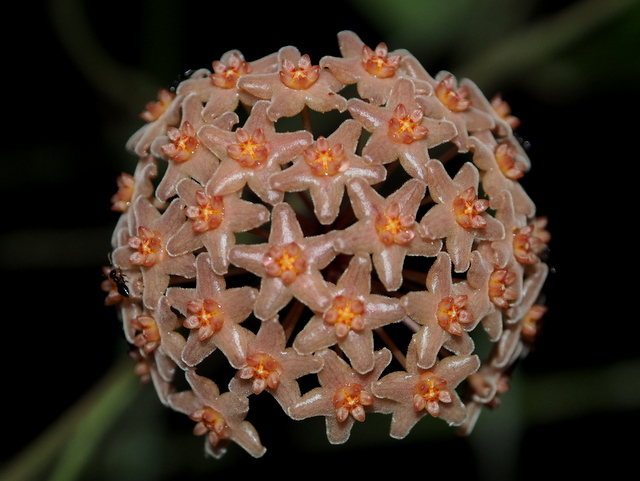 I call this Hoya bifunda ssp. integra. However, that name is still not conclusive. It belongs to the camphorifolia complex, the smaller flowered hoyas. The diameter of the umbel is only 1-1.5 inch in diameter, and the flowers do not last for 2 days. But when the umbel is full it lends beautifully to photography. As one of my colleagues say, "the other half of hoya growing is in photography". And i fully agree. 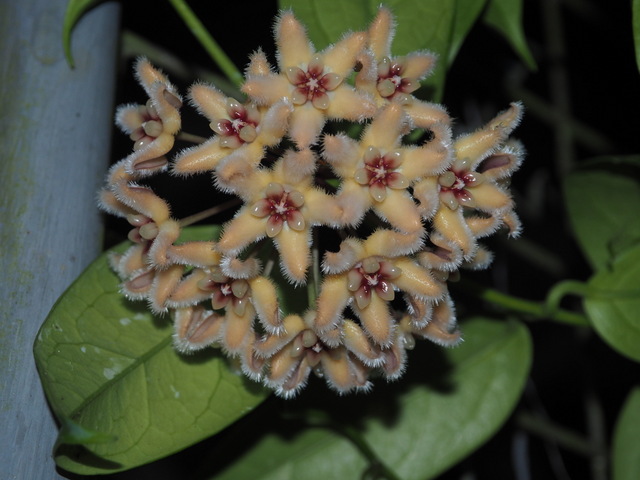 Hoya buotii is called the Starfish Hoya, you will agree that each flower really looks like a starfish. I have four variations of its color and all of them are lovely. There is the more purple, while another is full yellow, the fourth one is yellow with dark brown corona. 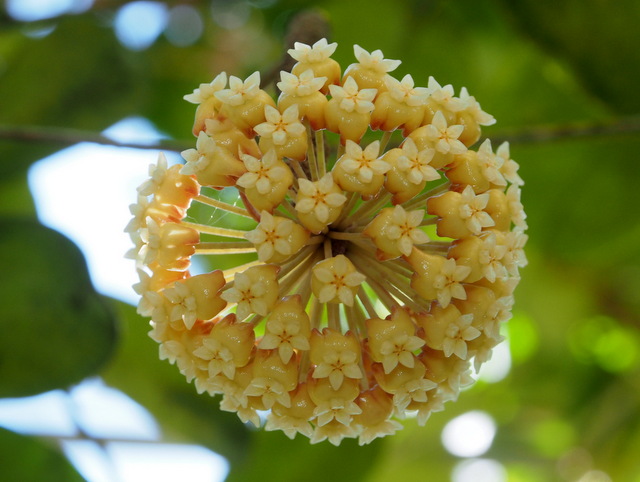 Above is a variety maybe of Hoya crassicaulis-incrassata group. It is Hoya 'Viola'. The characteristics of reflexing corolla in a very round umbel is coupled with the same lemony scent. It is also favored by some butterflies, which i most prefer. The leaves however are much bigger with distinct obvious venation. 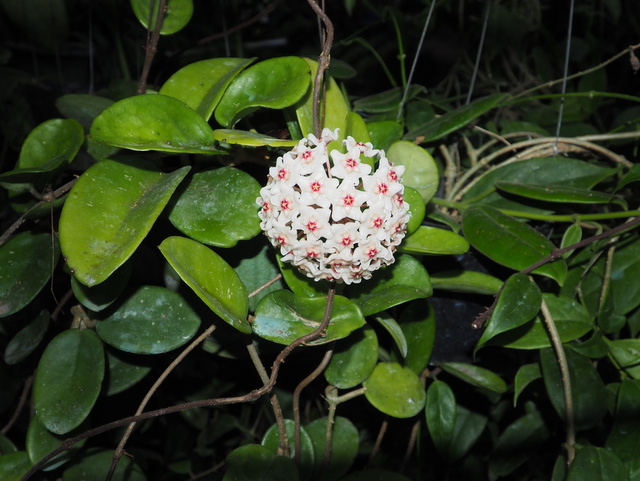 the plant of a Hoya carnossa seedling is blooming now 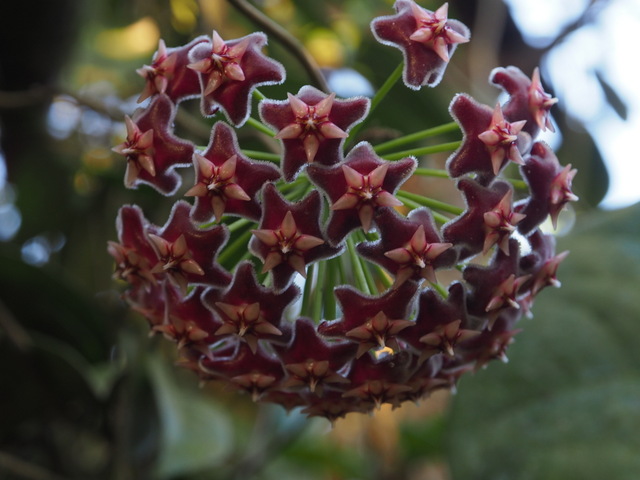 Hoya pubicorolla ssp. anthracina is formerly called Hoya pubicalyx 'Black Dragon'. Compared to H pubicalyx, it has shiny, clear lighter green leaves and green pedicels. There are actually two color variations with strongly black and slightly black, i got the latter. I am still hoping i can get the 1st color form, but my source will still be coming from Sweden. Although it is endemic to the Philippines, sadly i do not have the privilege to get it locally. 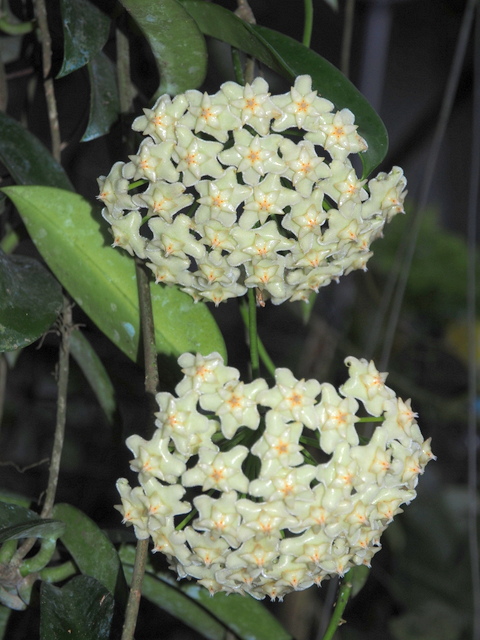 Hoya celata is called Hoya pubicalyx 'White Dragon' by some foreign growers. Its leaves are very similar to H. pubicorolla ssp. anthracina, just that the flowers are white. Same as the latter it is also very viny with longer internodes. Basically, they just differ in color. 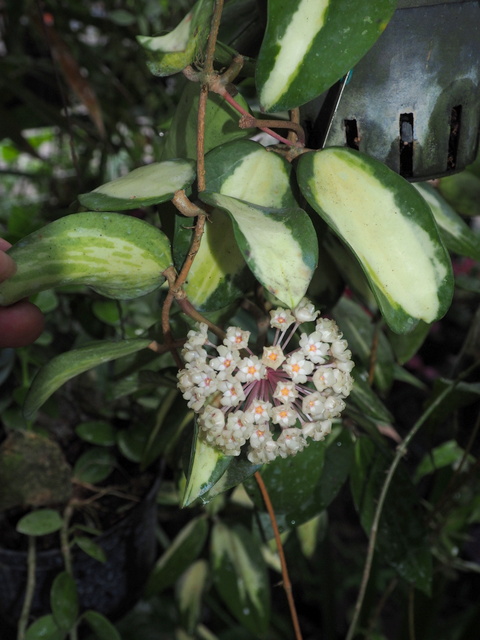 Hoya verticillata variegated. Like all variegated plants, it is growing not as fast as their normal green forms. I am not favored to see it in full bloom, and the photo above is taken the day after the flowers closed. But unlike other hoya, the flowers open again the next 2 days in the morning, although not as fully exposed as the first time. 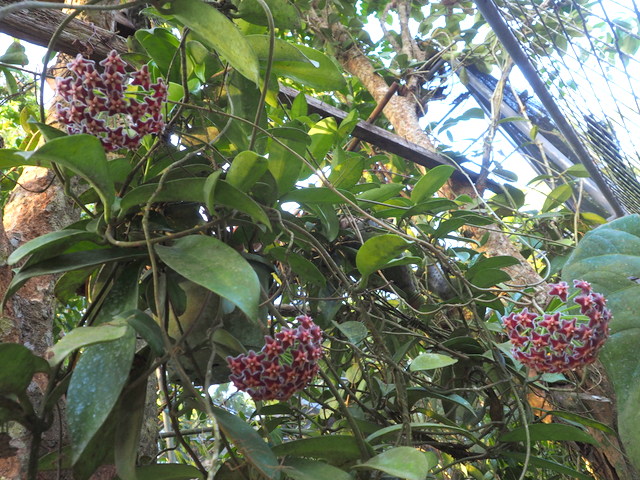 This Hoya pubicorolla ssp. anthracina inadvertently climbed the lanzones tree already, following the Hoya diversifolia, which i actually trained to climb it. Apparently, most of them behave more lively and happier when on trees simulating the natural forest habitat. Because this has already claimed its niche, i already allowed it to remain there. 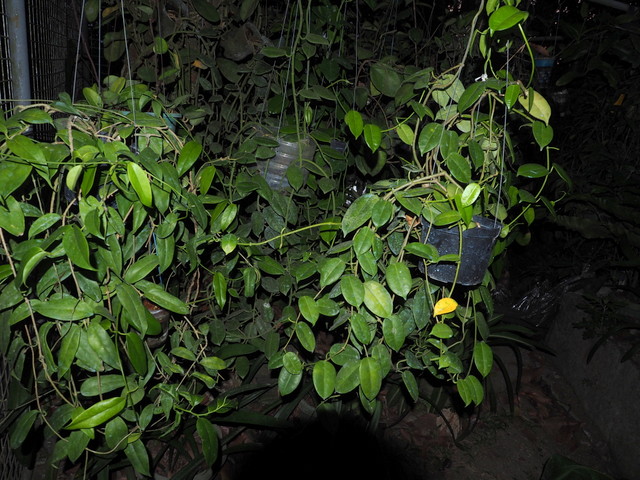 Some hoyas i pictured at night. They are already wanting for more space, but i do not have what they want. I cannot even provide the much needed water. Anyway, i hope the rainy season is coming early next month, so they will look happier, fuller with more blooms!

Hippeastrum Blooms in May

When climate was still reliable, and it has not yet been acting like a stressed psychopath, hippeastrum here in the hot tropics wake up from dormancy after the first heavy rains. By heavy rains i mean continuous rains that lasted for long hours or overnight. That literally soaks the soil deep until the roots of trees are fully quenched. That is the time when after 2-3 days the grasses starts to produce the green carpet, and the weeds starts to simultaneously germinate.

However, with the so called "Climate Change", not only people are experiencing the dilemma and problems in planning agricultural planting. Even the plants themselves suffer chaotic behavior. And that response to rain is very obvious with the hippeastrum blooming. We got some long drizzles in March and April, enough to break dormancy of some hippeastrum bulbs. Definitely, i will not be getting again simultaneous blooms from my H puniceum hedges and mounds. Moreover, i will not be able to pollinate some blooms as they will not bloom simultaneously. This year is a repeat of last  year. It is now May and i am already getting the bad picture of the climate change outcome.

The first one and No. 3 are red while the others are orange. 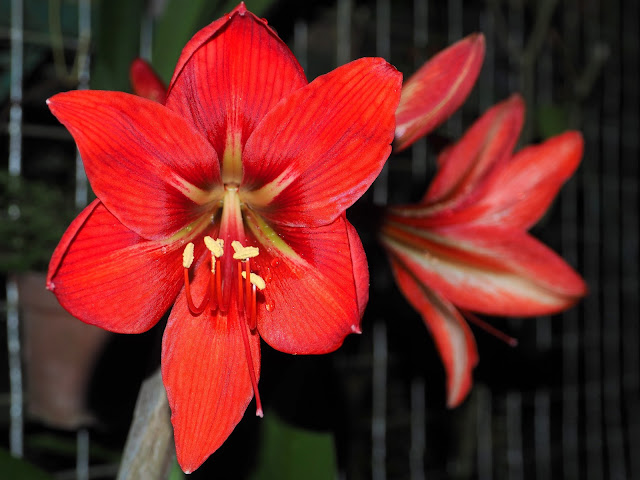 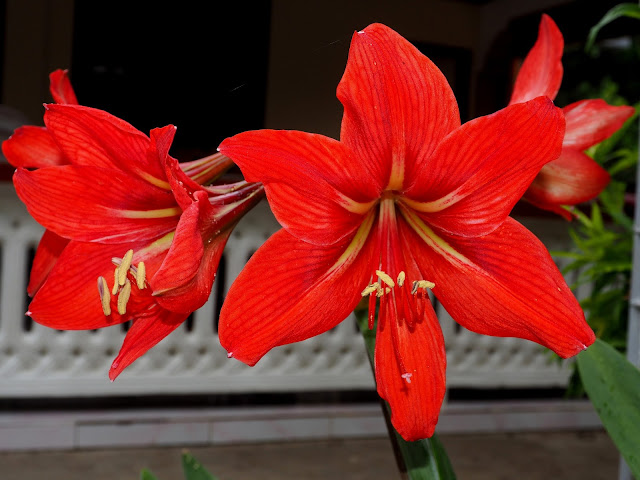 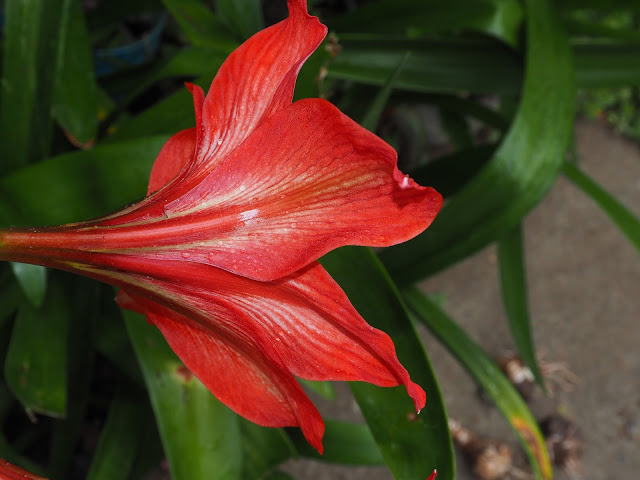 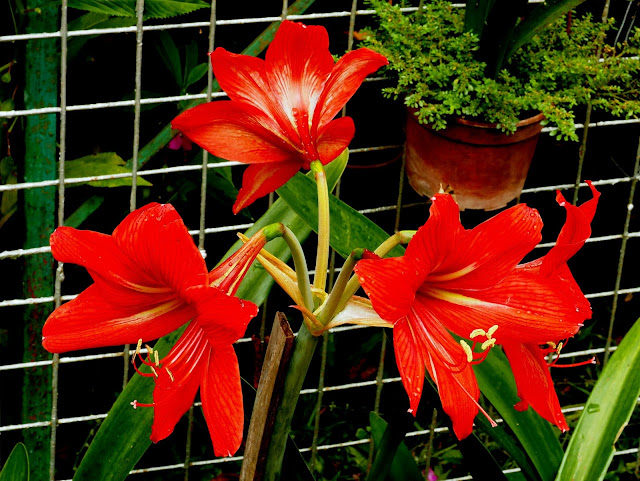 It has shorter growth, scape and smaller bulbs. The flowers are also smaller but compensated with more number of 4 flowers per scape. 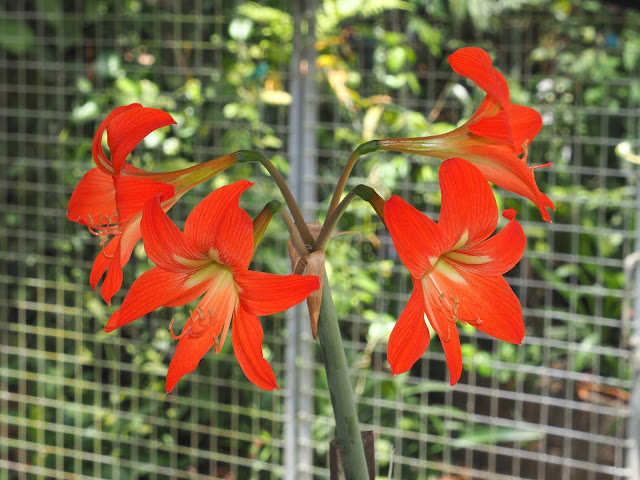 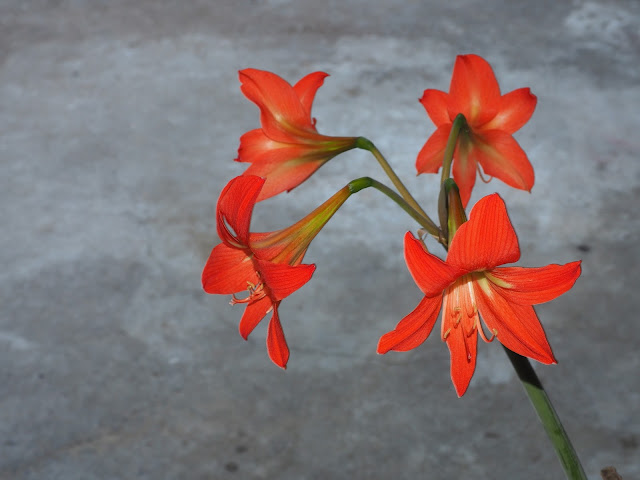 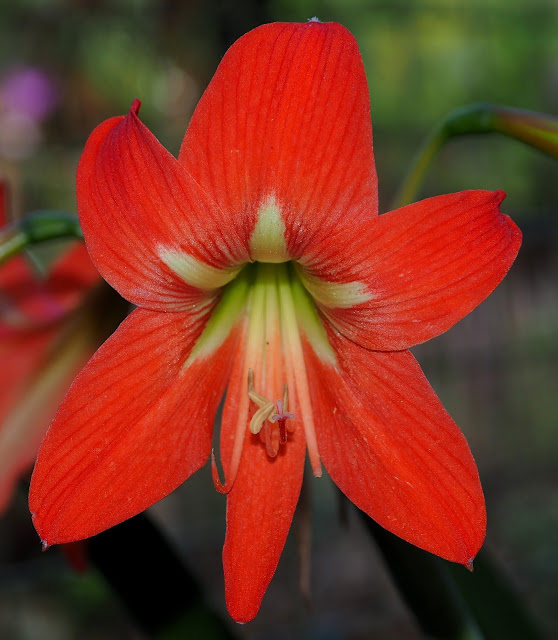 3. Hippeastrum from seeds of Carol Noel
They have much bigger bulbs, longer leaves, taller scape and big flowers. The tips of the flowers also tend to flip that brings more grace to its look. They also have 4-5 flowers per scape. 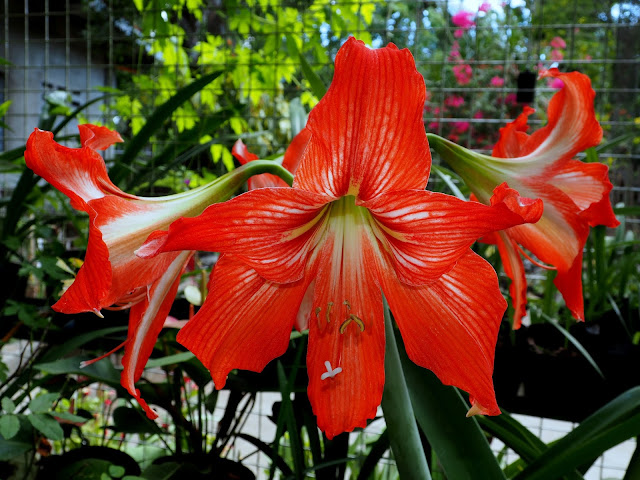 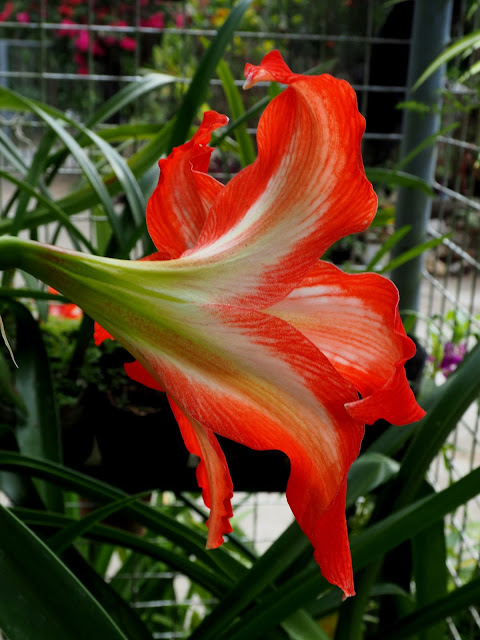 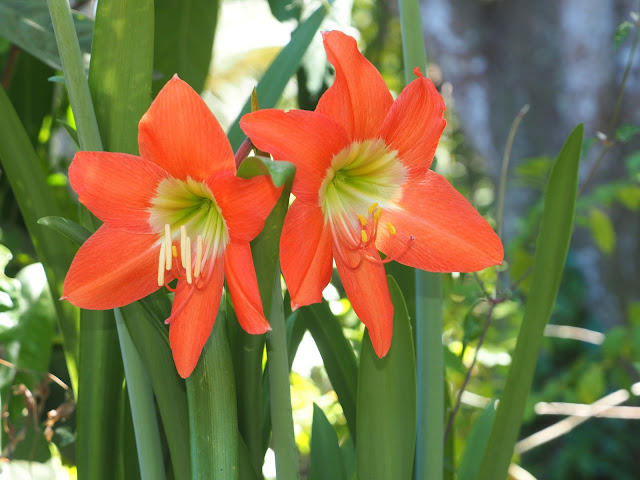 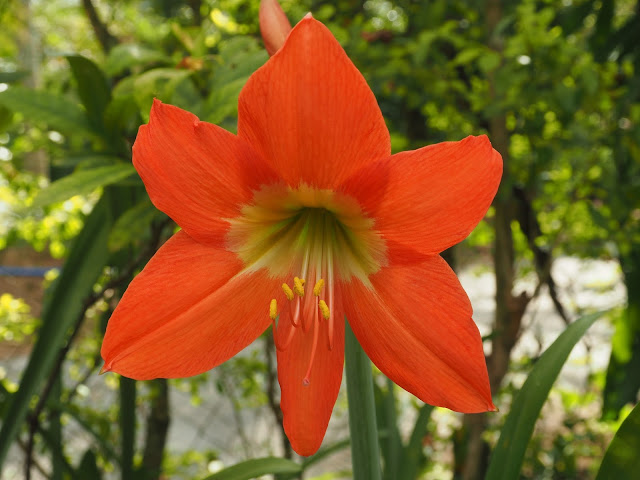 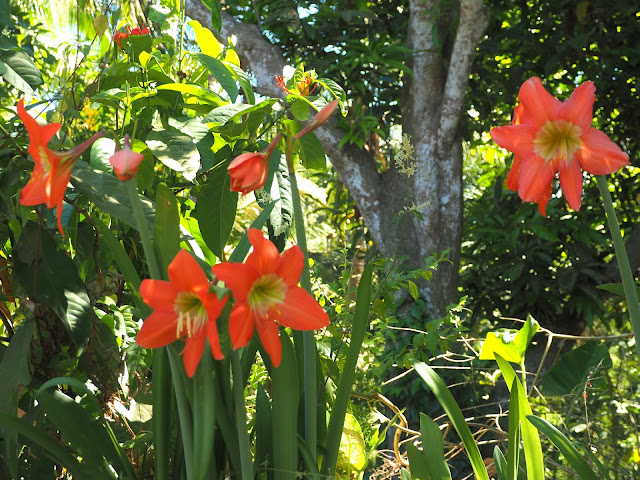 This hybrid of H. puniceum is short, with leaves also dwarfed by the other species. However, the multipetalled flowers get the wonderful limelight. Besides, the blooms last for several days. 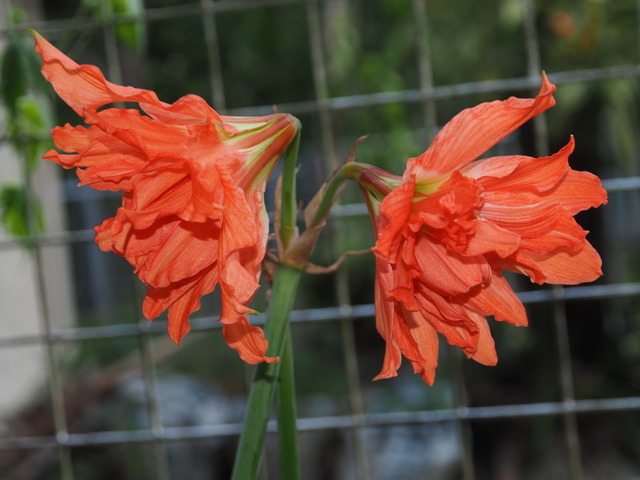 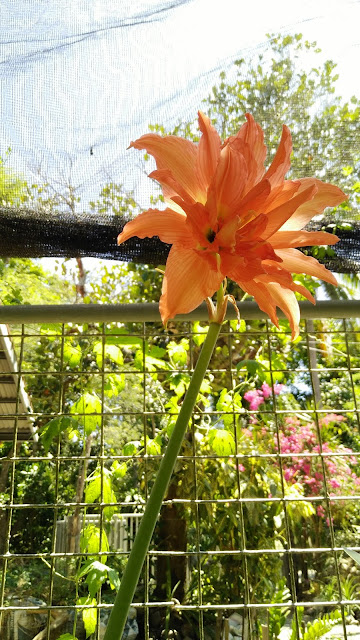 This is also a diminutive species, but taller than that of H. 'Alberti'. Leaves are more erect and        thicker too. However, the flowers per scape are normally just 2-3. Flower sizes are also narrower just like the H. petiolatum. The stripes however gives it the outstanding attraction. 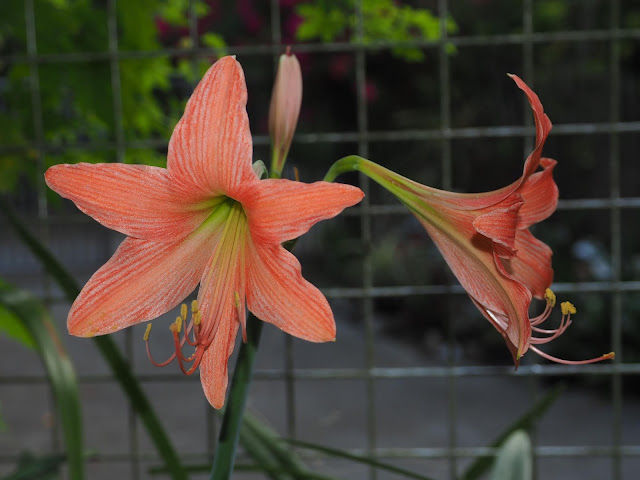 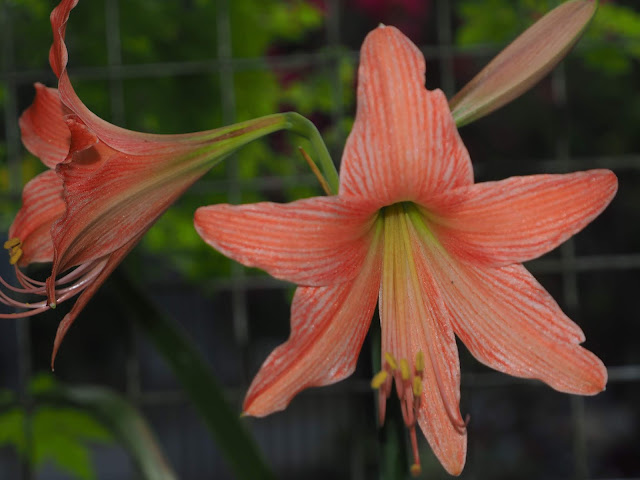