These are just some intermission between my hoya posts. I just want to give you some rest, for fear that you might get bored with purely hoya photos. And also because i want to link again with Ruby Tuesday. 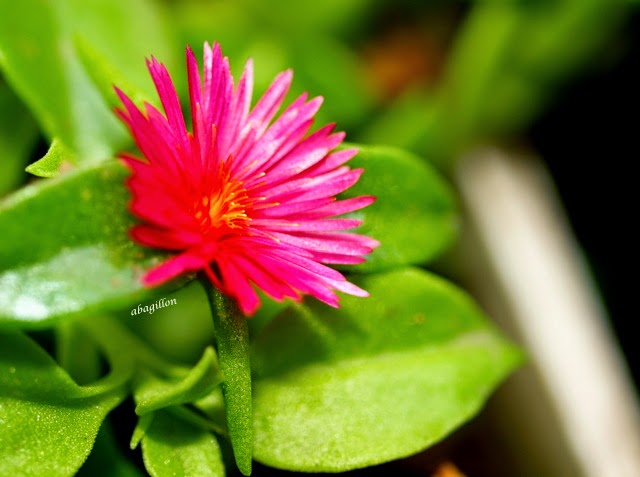 a red succulent flower, but i don't know its ID 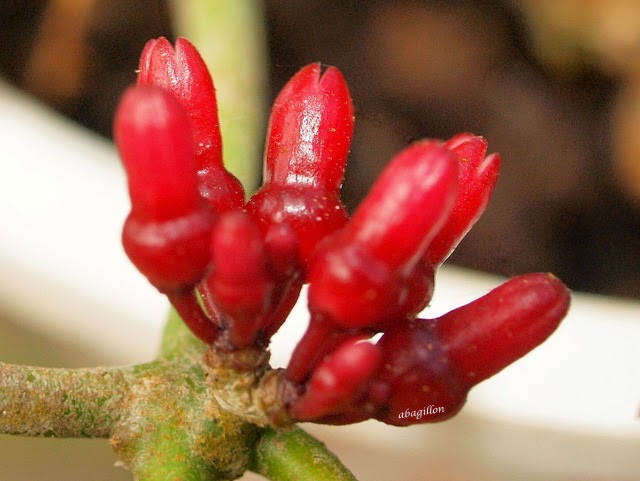 Dischidiopsis parasitica is endemic in the Philippines. The length of this lipstick-shaped flowers is only half centimeter.

Faces and Phases of Development

Hoya mindorensis is one of the hoya species endemic to the Philippines. The word "mindorensis" came from Mindoro, an island province in Southern Tagalog in Luzon. The first collected specimen could have been found in this province, so they deemed it right to name it from the place it is first found.

Presently, there are 12 identified color forms of Hoya mindorensis, but hobbyists and collectors said there are actually more than that, roughly less than 20. I have about 6 color forms, and i still intend to add a few more. They are prolific bloomers that once primed they just continue flowering from the same peduncle, and still continue producing new peduncles. Flower opening starts in late afternoon and completely opened before dusk. Simultaneous with opening comes the oozing nectar, and the scent. It just means it is ready for pollinators, attracted by the scent and nectar. I will be showing here only 2 color forms. 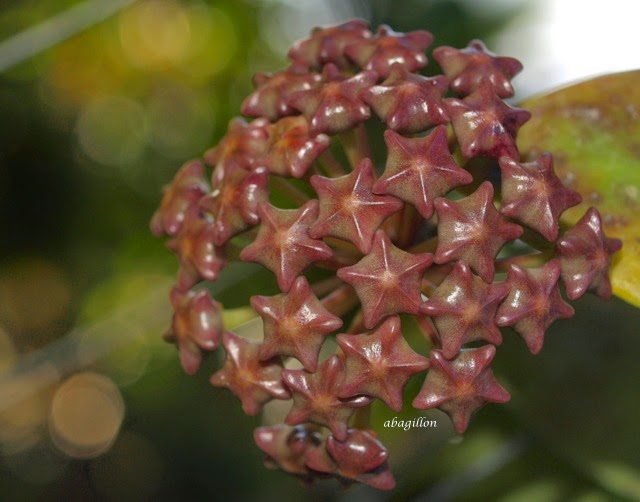 The flower growth stage above is almost ready for opening in less than 5 days. It is so crucial for me to be there near the plant when it starts to open, as i want to document and see the drama unfolding before my eyes. It is handy when the plants are very near the house, so i can almost watch them from the terrace. At 3 or 4:00 pm i start to check them minute by minute. Even if they normally open in the late afternoon, some species open earlier than others. This one opens at 4 pm. Individual flowers do not open at the same time, sometimes they take turns. They even produce small popping sounds when they start to crack the corolla. 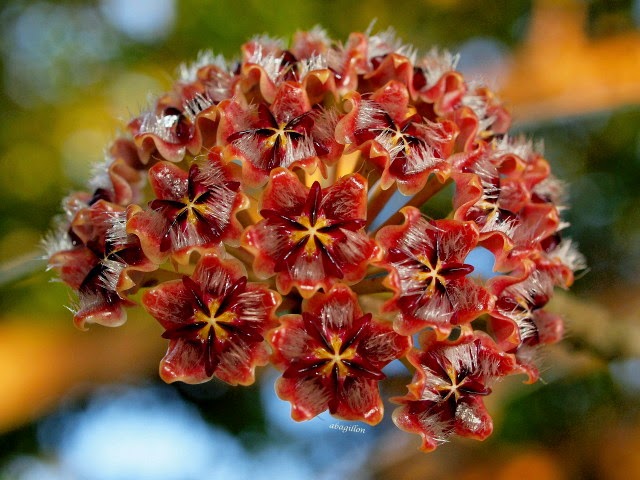 The above photo shows the early face of the umbel a few minutes after opening. The corolla are still laid out horizontally with the corona. In less than one hour they will start to reflex back, so i am in very close attention, or i will not be able to photograph this phase of flower opening. 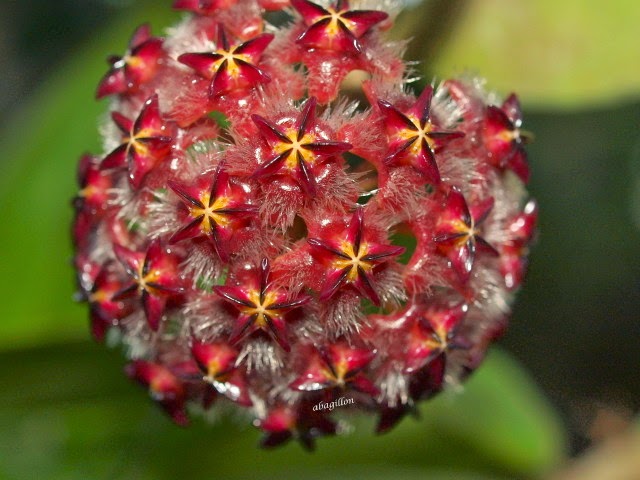 As soon as the corolla are fully open, the nectar starts to ooze out, simultaneously with the scent. That signals its readiness for pollination. I observed that nectar ceases its production on the third day. Flowers dehisce in four days. 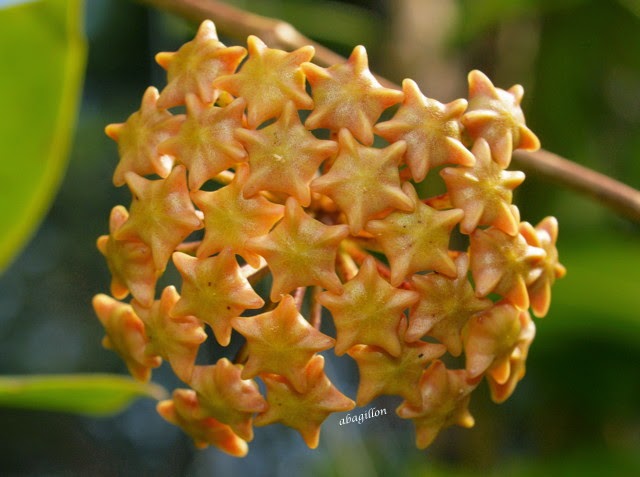 Above is another color form of H mindorensis. Even at the stage before opening, we can see the almost yellow color of what is inside.  At this stage i am already maximizing my stay near the plant or i might stay indoors longer missing the drama of opening. Watching every flower in an umbel is really an unusual experience. Anybody who experienced watching them unfold will further be hooked to hoya growing, and like me will be more addicted to them. An FB friend even took the unfolding flower video and posted it, very interesting! 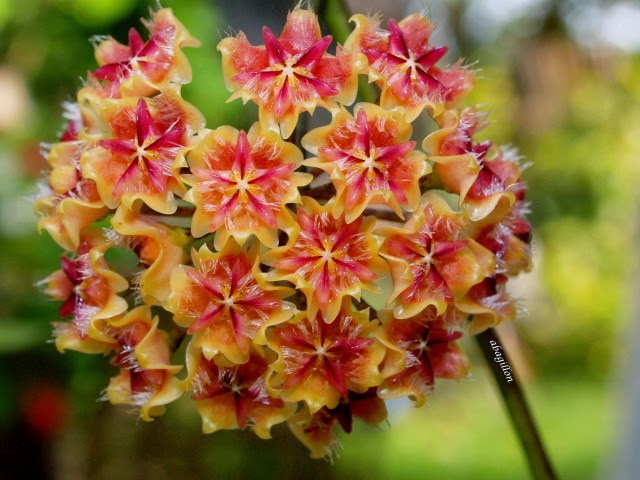 This is the newly opened flower of the previous flower buds. Can you now relate to what i have been telling you? The hairs that start to show up eventually will be totally bathed with nectar. I even taste the nectar way ahead of the bees and ants. I am trying to compare the taste among the species but my tongue is not very sensitive to the slight differences in sugar, if there is! 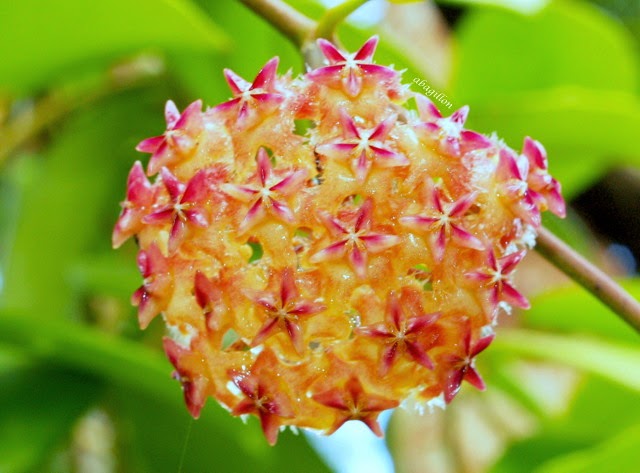 The fully reflexed corolla above is fully bathed with nectar. The pollinators are more active at night, so we cannot see them here yet. Probably, the intended pollinators are moths because they are the nocturnal entities among the insects frequenting these flowers.

Hoyas in just a few decades ago are wildflowers in the deep forests of this country. However, many collectors and foreigners who pay locals to collect them have been gathering them and introduced them to the collectors in the world. Now, when we in this country become interested in these plants, they are very seldom found anymore in the wild. Either the prospectors and their sub-collectors already got most of them, or the slash and burn agriculture finished them off. The new generation hobbyists experience difficulties in finding more stocks from the wild, or find the foreign prices to be too high for their capacity to pay. There are still some available species in the deepest forests, but even forests are lost so rapidly. So we lament for the hoyas!

Note to Wildflower Wednesday followers: You might not agree that this is a wildflower, as they are already in the gardens of the world. They are not colonizers of gardens, but they colonize the world through the hobbyists, and they are colonizing many hearts, turning them Hoya Addicts!

Hoya flowers are normaly borne in umbels with many individual flowers. Flower numbers depend on the age of plant, vigor, environmental conditions and of course genetics. Some umbels are tight with individual flowers in short pedicels. Most of this type produce perfect spherically shaped umbels, that are really beautiful and distinctly attractive.

Some hoyas however produce flowers in longer pedicels, with flowers like sprays. Sometimes the pedicels are also of different lengths and the individual flowers have staggered maturities. Most of the species i will show below are of this 2nd type of flowers, scattered and not the spherical umbels. Only the last one belongs to the 1st umbel type. They are all mildly and pleasantly scented. The first two are growing upright like a bush, while the last two are twining vines. 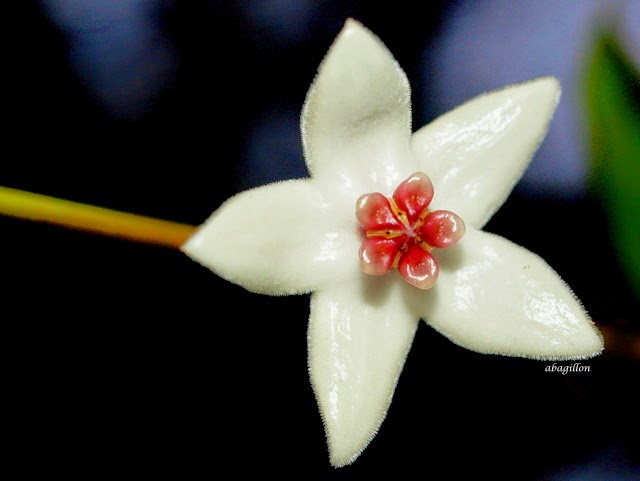 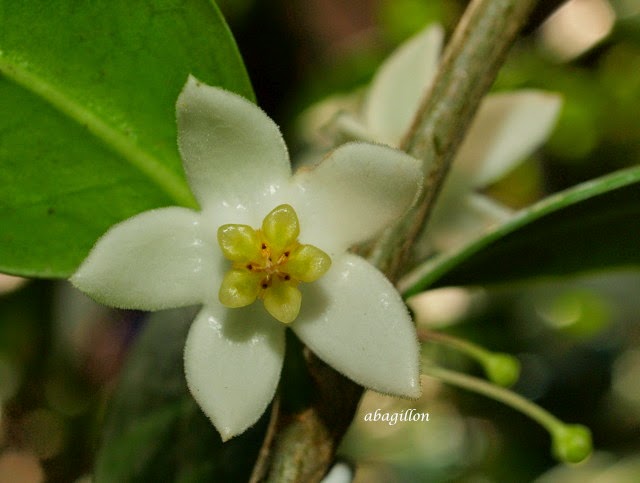 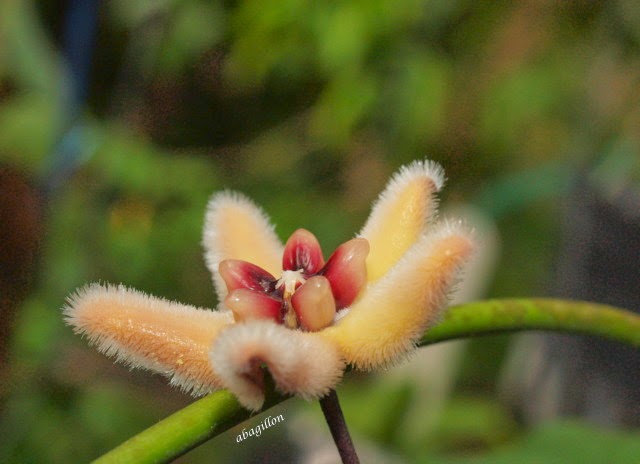 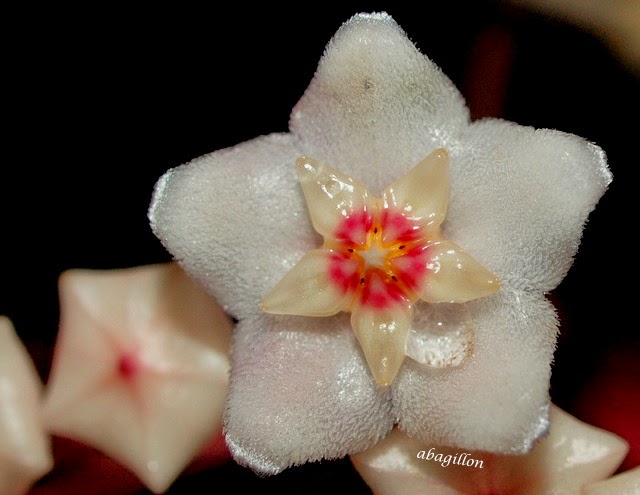 
I've been looking for unusual colors in our plants. Of course you know that we have a lot of oranges and reds, and sometimes they get already boring. But if we just take time to look for the not-so-ordinary, we will find. And even if these are ordinary plants, the colors are not in our conditions. 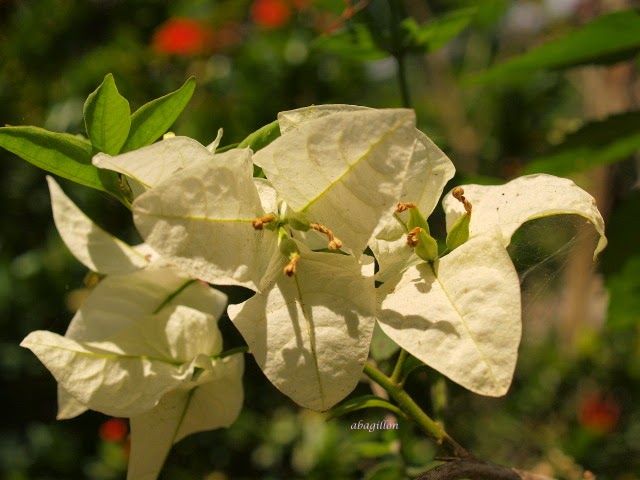 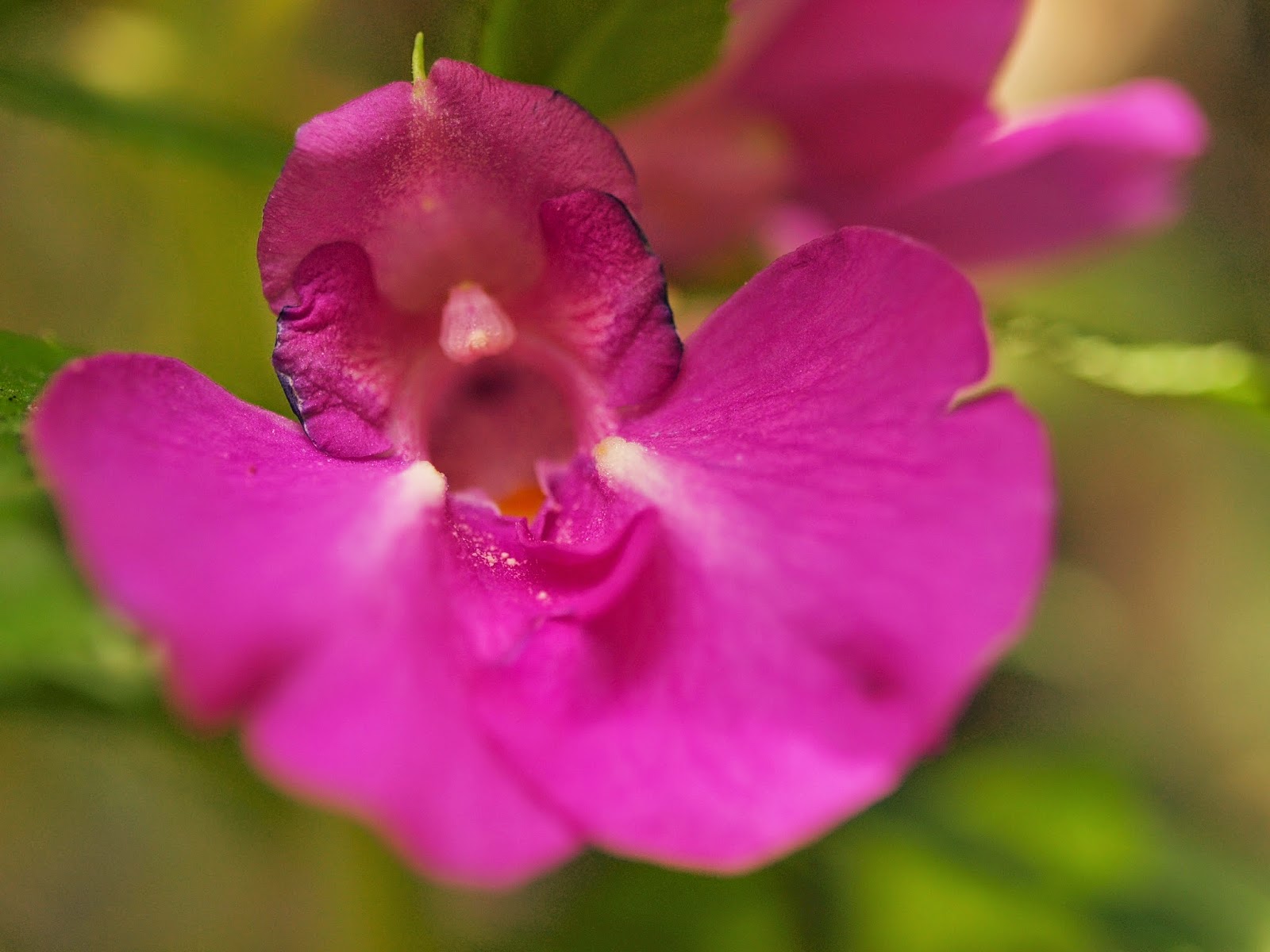 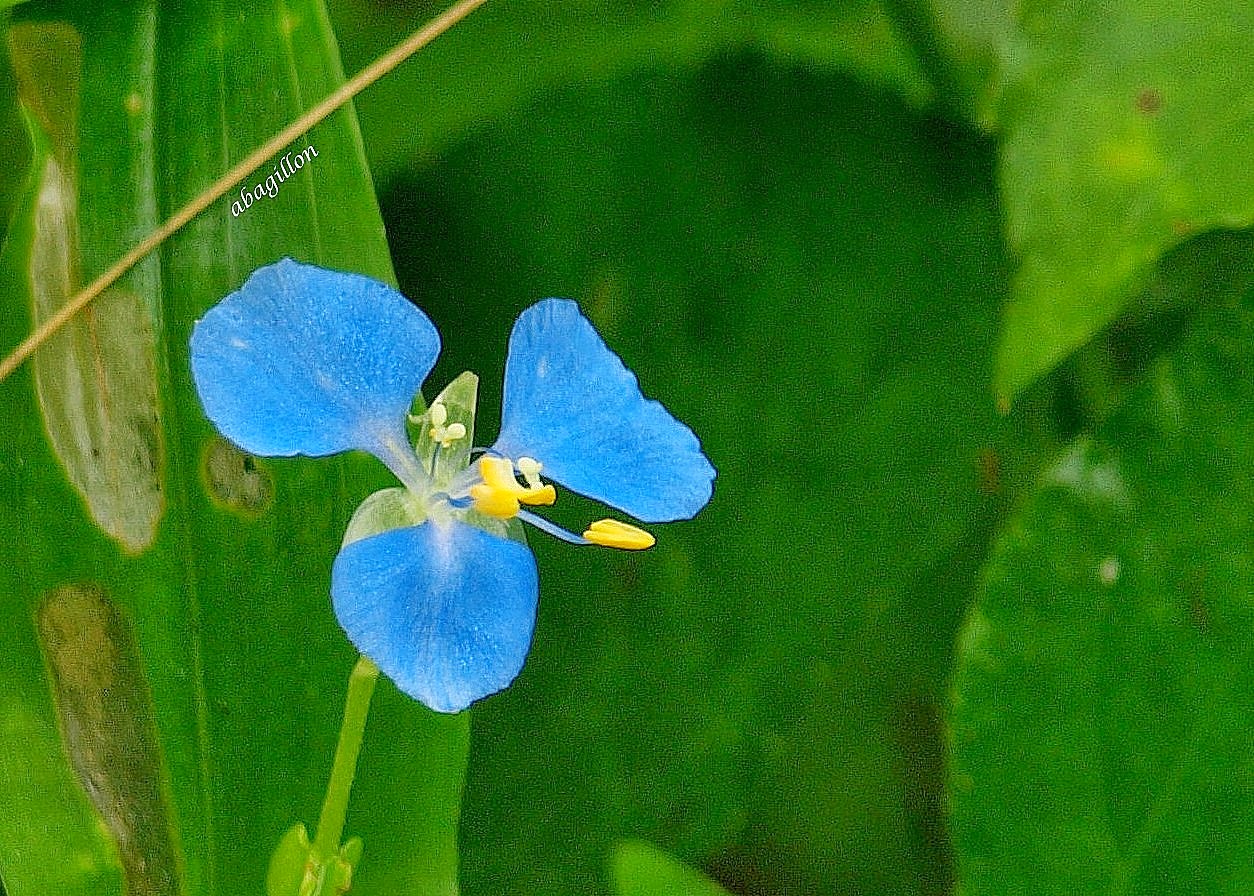 Blues are difficult to find, this is a weed with very small inflorescence, of about 1 cm a petal. 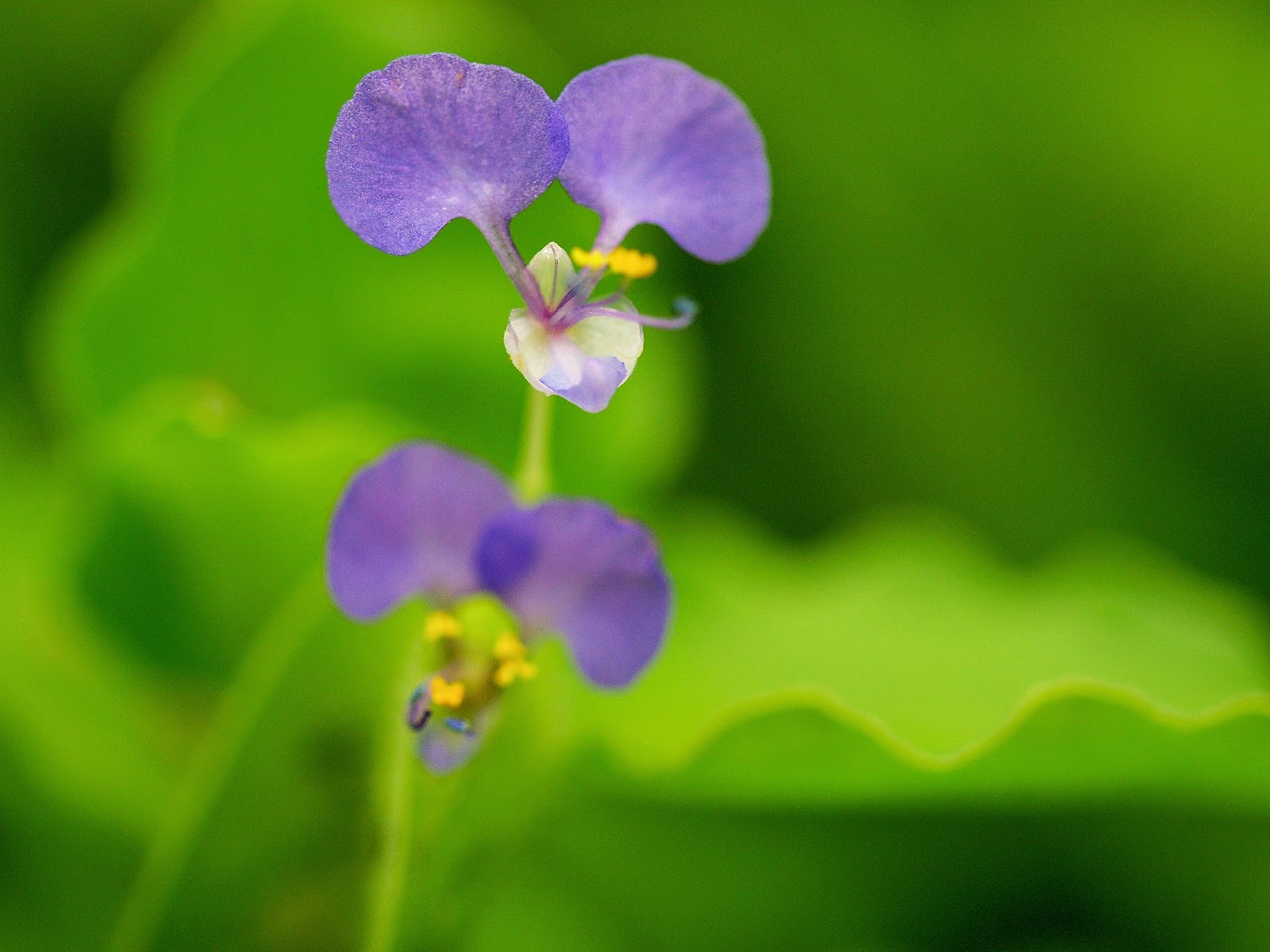 This one is related to the blue flower, but this is much smaller of only 3mm per petal. It is purple. They are so dainty, i wonder what type of insects can see and pollinate them.

I have not been linking to Orange You Glad It's Friday for a while now! I have been so engrossed posting my hoya pictures, and my consciousness is totally engulfed with all hoya thoughts, so i am attempting to post again some orange colors.

I have a lot of critters and other pictures but i can't even resize them for posting. You cannot blame me because you very well know I am a confirmed and self-proffessed addict, that is hoya addict. And if you think i will give it a break now, you're mistaken. As the next photo is of my Hoya ilagiorum. It is its first flowering so i am smitten. But it is orange, so it very well qualify to be here! 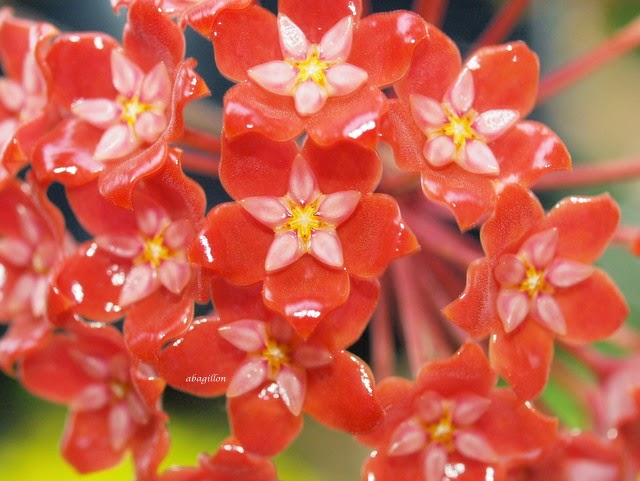 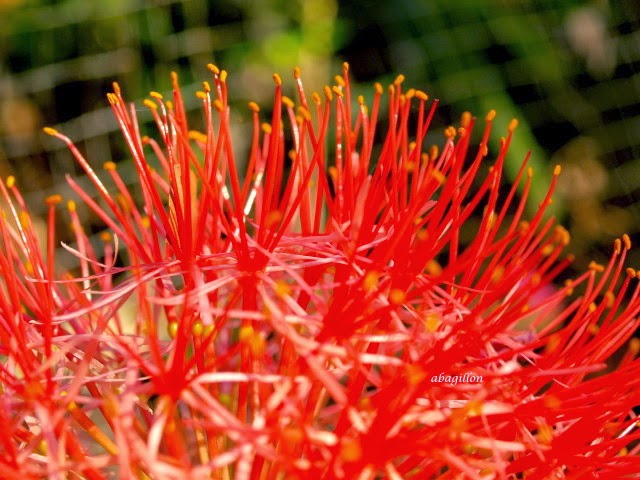 Above is the newly opened blood lily, or Scadoxus multiflorus 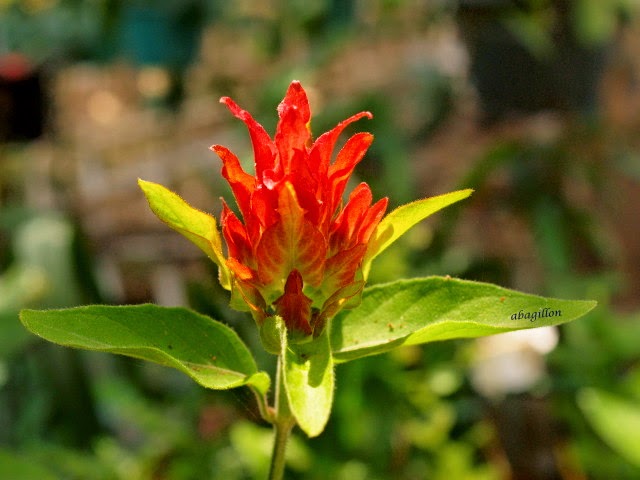 I am not sure of this, maybe one of the Justicia species

Orange You Glad It's Friday 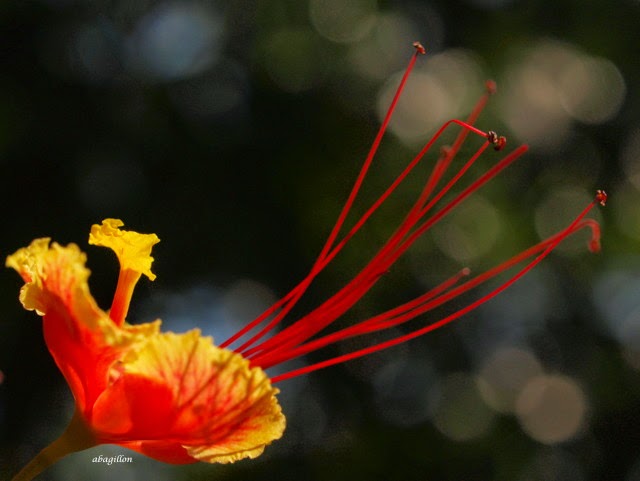